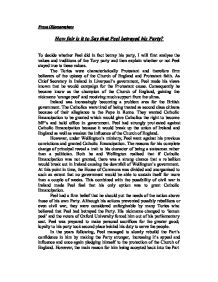 How fair is it to Say that Peel betrayed his Party?

Freya Ollerearnshaw How fair is it to Say that Peel betrayed his Party? To decide whether Peel did in fact betray his party, I will first analyse the values and traditions of the Tory party and then explain whether or not Peel stayed true to these values. The Tories were characteristically Protestant and therefore firm believers of the upkeep of the Church of England and Protestant faith. As Chief Secretary in Ireland in Liverpool's government, Peel made his views known that he would campaign for the Protestant cause. Consequently he became know as the champion of the Church of England, gaining the nickname 'orange peel' and receiving much support from the ultras. Ireland was increasingly becoming a problem area for the British government. The Catholics were tired of being treated as second class citizens because of their allegiance to the Pope in Rome. They wanted Catholic Emancipation to be granted which would give Catholics the right to become MP's and hold office in government. Peel had strongly protested against Catholic Emancipation because it would break up the union of Ireland and England as well as weaken the influence of the Church of England. However, under Wellington's ministry, Peel went against his previous convictions and granted Catholic Emancipation. ...read more.

The Irish Catholics wanted more rights and Peel felt he needed to offer them concessions in order to preserve the union between Ireland and England. He therefore produced the Maynooth Grant, which gave Catholic priests a better education and training. He also passed the Charity Banquets Act 1844, which enabled amounts of money to be paid to the Catholic Church. This saw strong opposition from within the Tory Party. They saw Peels move as an endangerment to the power of the Anglican Church of England. They organised a massive petition against the bill and a majority of Tories voted against it. It also caused Gladstone to resign from government in protest to Peel's actions. Furthermore, Peel proposed a Bill to educate Irish regardless of their religion called the Irish Colleges Bill. This move came under attack from both sides. The Catholic Church described him as godless and the Tories also opposed. All this led to a backbench revolt- the trust, which Peel had worked, so hard to gain was lost. Arguably, Peel's most significant betrayal of his Party was his repeal of the Corn Laws. They had been introduced in 1815 to protect British farmers from competition abroad by heavily taxing foreign corn. ...read more.

Peel was bitterly attacked by his own Party, Disraeli and Bentinck led the internal opposition to Peel. They saw his decision o repeal the Corn Laws as a terrible betrayal of the Party. As party leader, they believed that Peel's first priority should be to protect the interests of his Party and supporters. The repeal totally destroyed the Tory party. Opponents to Peel formed the Protectionist Party who worked to prevent free trade supporting MP's from returning to Parliament. Peel resigned and the Whigs took over. The Tories were in such a divider state that they were unable to win an election for nearly 30 years. Peel has been critisized for destroying the Party he crated. Many contemporaries believe he betrayed them. Peel did not set out to betray his Party or values but when presented with a situation where upholding Party principals would have a negative impact on the welfare of the nation, he refused to do this and therefore was seen to betray his Party. During the years which he rebuilt his Party and brought them back into power, Peel was merely Party leader and did not have the nations needs to consider, but when he became Prime Minister he abandoned the expectations of a Party leader and did not stay true to the Party. The Tories failed to accept Peel's priority o the people, believing instead that his job was to look after their interests. ...read more.