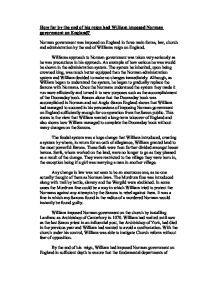 How far by the end of his reign had William imposed Norman government on England?

How far by the end of his reign had William imposed Norman government on England? Norman government was imposed on England in three main forms, law, church and administration by the end of Williams reign on England. Williams approach to Norman government was taken very seriously as he was precautious in his approach. An example of how serious he was would be shown in the administration system. The system he inherited, upon being crowned king, was much better equipped than the Norman administration system and William decided to make no changes immediately. Although, as William began to understand the system, he began to gradually replace the Saxons with Normans. ...read more.

The feudal system was a huge change that William introduced, creating a system by where, in return for an oath of allegiance, William granted land to the most powerful Barons. These fiefs were then further divided amongst lesser barons. Serfs, whom worked on the land, were no longer to go as they pleased as a result of the change. They were restricted to the village they were born in, the exception being if a girl was marrying a man in another village. Any change in law was not seen to be an enormous one, as no one actually thought of them as Norman laws. ...read more.

William had waited until now as the last Saxon priest in an influential post, the Archbishop of York, had died in the previous year and William had wanted to avoid a confrontation. With the church under his control, William was able to instigate Church reform without fear of opposition. By the end of his reign, William had imposed Norman government on England in sufficient depth to ensure that the fundamental departments of Central Government, the Church and Personnel were under his control. This ensured that the country was more efficiently run than before Williams reign. Along with his military skills, William had been able to gain the support of England through shrewd, carefully planned changes to fundamental systems that did not make the Saxon people feel like everything was changing completely beyond recognition under Norman rule. Written by Mark Costa ...read more.