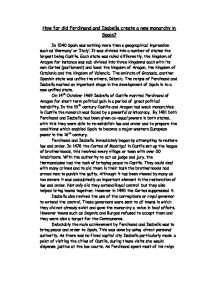 How far did Ferdinand and Isabella create a new monarchy in Spain?

How far did Ferdinand and Isabella create a new monarchy in Spain? In 1540 Spain was nothing more then a geographical impression such as 'Germany' or 'Italy'. It was divided into a number of states the largest being Castile. Each state was ruled differently, the kingdom of Aragon for instance was sub divided into three kingdoms each with its own Cortes (parliament) and laws: the kingdom of Aragon, the kingdom of Catalonia and the kingdom of Valencia. The emirate of Granada, another Spanish state was unlike the others, Islamic. The reigns of Ferdinand and Isabella marked an important stage in the development of Spain in to a new unified state. On 14th October 1469 Isabella of Castile married Ferdinand of Aragon for short term political gain in a period of great political instability. ...read more.

Although it has been viewed by many as too severe it was undoubtedly an important element in the restoration of law and order. Not only did they extend Royal control but they also helped bring towns together. However in 1495 the Cortes suppressed it. Isabella also revived the use of the corregidore or royal governor to extend the control. These governors were sent to all towns in which they did not already exist and gave the monarchy a voice in local affairs. However towns such as Segovia and Burgos refused to accept them and they were also a target for the Communeros. Debatably the main achievement by Ferdinand and Isabella was to bring peace and order to Spain. This was done by using direct personal authority. As there was no fixed capital city Isabella particularly made a point of visiting the cities of Castile, during these visits she would dispense justice at the law courts. ...read more.

According to J.N.Hillgarth the major innovation of the monarchs was their ability to acquire extraordinary revenue, such as the cruzada and loans for the wars in Granada. The monarchs also received revenue from the Holy Brotherhood and the military orders. In all the monarchs had increased there extraordinary revenue by two thirds compared to there predecessors. There seems little evidence to suggest that Ferdinand and Isabella created a new monarchy in Spain rather then just improvements of the old ideas. Fernandez Naverrette said 'they founded the greatness of this immense monarchy' however Ferdinand and Isabella had no intention of a united Spain. It is also clear that the monarchs stuck to traditional methods of government to achieve their aspirations. It seems they achieved very little in limiting the nobles power or the power of the cortes and any financial advancements they did make, they squandered on the wars. The monarchs through the javelin well however it was unfortunate that it did not stick in the ground. ...read more.