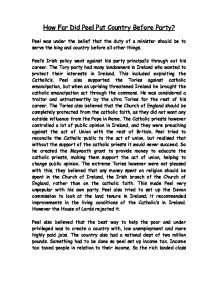 How Far Did Peel Put Country Before Party?

How Far Did Peel Put Country Before Party? Peel was under the belief that the duty of a minister should be to serve the king and country before all other things. Peel's Irish policy went against his party principal's through out his career. The Tory party had many landowners in Ireland who wanted to protect their interests in Ireland. This included exploiting the Catholic's, Peel also supported the Tories against catholic emancipation, but when an uprising threatened Ireland he brought the catholic emancipation act through the commons. He was considered a traitor and untrustworthy by the ultra Tories for the rest of his career. The Tories also believed that the Church of England should be completely protected from the catholic faith, as they did not want any outside influence from the Pope in Rome. The Catholic priests however controlled a lot of public opinion in Ireland, and they were preaching against the act of Union with the rest of Britain. Peel tried to reconcile the Catholic public to the act of union, but realised that without the support of the catholic priests it would never succeed. So he created the Maynooth grant to provide money to educate the catholic priests, making them support the act of union, helping to change public opinion. The extreme Tories however were not pleased with this, they believed that any money spent on religion should be spent in the Church of Ireland, the Irish branch of the Church of England, rather than on the catholic faith. ...read more.

Many of the Tories were rich farm owners; they believed that the Corn Laws protected their income from foreign imports of corn. The Corn Laws were a set of laws that were created to protect the profits of farmers against foreign imports. They taxed all foreign imports of corn making the cheep foreign corn far more expensive. This meant that they could sell more of their own corn for less than foreign farmers and still make a large profit. Peel however had been cutting the taxes on all foreign imports with the exception of the corn taxes. Many of the Tories believed that the Corn Laws would be the next to be removed. Peel also sent some people to find out how much corn was in the foreign stocks, they found that there was very little foreign corn to flood the British market. This meant that the Corn Laws were pointless, as they didn't really do any thing to the price of Corn in Britain. A group of people also formed a group called the Anti Corn Law League. They were opposed to the Corn Laws and they set up mass demonstrations, and whipped up support from their cause by posting letters in newspapers. They were a radical group who frightened Peel. He hated it; they were a non-government organisation that did not go through parliament, so Peel decided they must be stopped. ...read more.

Peel realised that if the Tories wanted any chance of being voted in at the next election he would have to gain the support of the middle classes. He did this by saying he would not change or repeal the reform bill. He said this in the Tamworth manifesto he also said this would be the last parliamentary reform. The Tamworth manifesto also stated he wanted to unite all property interests in defence of the constitution. This included men of industry and commerce. This would allow an increase in trade pleasing the middle classes. The Tamworth manifest was designed to attract the vote of the middle classes and at the same time appease the extreme Tories. So from inheriting a party that was divided and stood no chance success in an election, he turned it into a successful opposition that eventually won the election in 1841. Peel did do things to support his party but he did more in support of the country. In several cases such as the Corn Laws he evidently placed the need of the country before the need of his party, So the original question how far did Peel put country before party, can be answered by saying that Peel put the country before the party if he believed that the party principals were compromising the needs of the country. This can be seen that he went so far in protecting the needs of the country that his party was split and destroyed, and didn't return to office for a generation. ...read more.