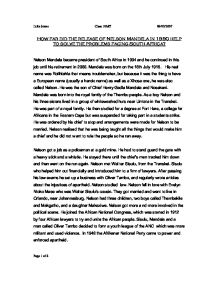 How far did the release of Nelson Mandela in 1990 help to solve the problems facing South Africa?

How far did the release of Nelson Mandela in 1990 help to solve the problems facing South Africa? Nelson Mandela became president of South Africa in 1994 and he continued in this job until his retirement in 2000. Mandela was born on the 18th July 1918. His real name was Rolihlahla that means troublemaker, but because it was the thing to have a European name (usually a heroic name) as well as a Xhosa one, he was also called Nelson. He was the son of Chief Henry Gadla Mandela and Nosekeni. Mandela was born into the royal family of the Thembu people. As a boy Nelson and his three sisters lived in a group of whitewashed huts near Umtata in the Transkei. He was part of a royal family. He then studied for a degree at Fort Hare, a college for Africans in the Eastern Cape but was suspended for taking part in a students strike. He was ordered by his chief to stop and arrangements were made for Nelson to be married. Nelson realised that he was being taught all the things that would make him a chief and he did not want to rule the people so he ran away. Nelson got a job as a policeman at a gold mine. He had to stand guard the gate with a heavy stick and a whistle. He stayed there until the chief's men tracked him down and then went on the run again. Nelson met Walter Sisulu, from the Transkei. Sisulu who helped him out financially and introduced him to a firm of lawyers. ...read more.

He was separated from Winnie in 1992 because of evidence that she was involved in some murders and kidnappings. On 3 of June 1993 a date was put forward for South Africa's first national, non-racial, one-person-one-vote election. It was to be held on 27th April 1994. In 1993 Nelson Mandela shared the Nobel Peace Prize with De Klerk for helping to scrap apartheid. The election, was the first that allowed the black majority to vote to elect their own leaders. The ANC got 62.6 % of the vote, giving them 252 of the 400 seats in the new national assembly. Mandela was made president of South Africa on 10th May 1994. The first thing he did was to release all young people from jail. In February 1995 President Nelson Mandela joined 1,300 fellow former political prisoners in a reunion at Robben Island jail. Today Mandela does not get involved as president. His deputy Thabo Mbeki chairs the cabinet. Mandela is divorced from Winnie. He has a new woman in his life Graca Machell, widow of the former president of Mozambique. The mood in South Africa is currently one of frustration and the lack of progress. The people want a younger president. Mandela's reputation has been damaged by the trial of his ex-wife Winnie and claims that he was supposed to be involved in the abduction of a witness. The meaning of the apartheid system is the segregation of racial group e.g. whites and coloureds. The main features of the system were the exclusion of the black majority from voting and participating in central government because of the colour of their skin. ...read more.

President De Klerk was important in negotiating the end of apartheid because he was influenced by the two-thirds majority in the referendum to get rid of the apartheid system. So Mandela and De Klerk were both important in that they worked together to bring about the end of apartheid. There were also many other associations apart from the ANC and foreign pressures to support and abolish the apartheid system Mandela has made an impact as president by helping to abolish Apartheid. The past has been confronted but the results of Apartheid are still around. There are still many South African coloureds living in bad conditions, but most of them do have electricity and better water supplies. It will take a long time for the people to forget how they were treated and to get over the things that were a part of being a coloured person. They are still trying to become a rainbow nation where everyone is treated as an equal. Mandela played an important role since his release trying to make his country a better place to live for all the people of South Africa. There is still racial discrimination in South Africa but in general the human rights of the people have improved by disallowing the death penalty and looking into land reform. The economic difficulties have definitely changed because the government holds a firm hand on the economy by working with industry to train people and by crediting schemes to tackle unemployment and to cut crime. The young black and white South Africans stand hopeful and proud to belong to their own ethnic groups and to be part of that rainbow nation. Course work written and checked by Luke Jones 10MT Luke Jones Class 10MT 08/05/2007 Page 1 of 1 ...read more.