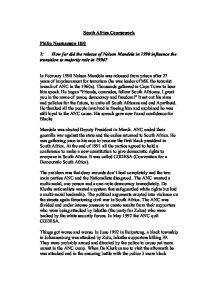 How far did the release of Nelson Mandela in 1990 influence the transition to majority rule in 1994?

South Africa Coursework Philip Nacmanson 10/0 1: How far did the release of Nelson Mandela in 1990 influence the transition to majority rule in 1994? In February 1990 Nelson Mandela was released from prison after 27 years of imprisonment for terrorism (he was leader of MK the terrorist branch of ANC in the 1960s). Thousands gathered in Cape Town to hear him speak. He began "Friends, comrades, fellow South Africans. I great you in the name of peace, democracy and freedom!" It set out his aims and policies for the future, to unite all South Africans and end Apartheid. He thanked all the people involved in freeing him and explained he was still loyal to the ANC cause. His speech gave new found confidence for Blacks Mandela was elected Deputy President in March. ANC ended their guerrilla war against the state and the exiles returned to South Africa. He was gathering pace in his race to become the first black president in South Africa. At the end of 1991 all the parties agreed to hold a conference to make a new constitution to give democratic rights to everyone in South Africa. It was called CODESA (Convention for a Democratic South Africa). The problem was that deep wounds don't heal completely and the two main parties ANC and the Nationalists disagreed. The ANC wanted a multi-racial, one person and a one-vote democracy immediately. De Klerks nationalists wanted a system that safeguarded white rights but had a multi-racial leadership. ...read more.

He was essentially a left wing politician but his black supporters were pulling him more and more left and his white 'enemies' were holding him back from falling into communism. He was juggling a lot of people's expectations. Apart from ANC blacks and Nationalist whites, there were the Inkatha Zulu blacks, the Asians and coloured who both had views on how the country should be run. Also outside pressure was on him to succeed in South Africa. A lot was certainly expected of Nelson Mandela. 3: Why, four years later, might (a) some black people and (b) some white people be disappointed by the progress that has been made? As Nelson Mandela's first term in office came to an end in 1998 he announced he would retire leaving control of ANC to deputy president Tharbo Mbeki. It was a time to review what had happened in the last 4 years and what people thought of the government. Whites were surprised. They weren't happy but it wasn't the complete disaster as they expected. Blacks were less likely to attack because they had their party in power and they were improving their lives. But they were angry that the cost was coming entirely out of their pockets. Less educated whites were very, very, very unhappy. Blacks were taking up all the un-skilled and semi-skilled jobs, due to 'positive discrimination'. Positive discrimination was invented to put blacks first. ...read more.

Police dogs have savaged illegal immigrants in supposed 'training exercises'. Racism is still rife in South Africa; indeed there are areas in Johannesburg that if a white man steps foot in it, he will come out in a coffin. This also applies the other way round in other areas. The economy is still slumping and because of that the big companies will not build factories to employ the lower class in South Africa. Crime has risen dramatically. Even to the extreme where most houses are more like fortresses then homes with barbed wire and security cameras. Unemployment has also given the communist and AWB parties more support. What lies in the future of South Africa? It could be a grenade ready to blow up in Thabo Mbeki's face. With an economy spiralling out of control and aids killing off the lower class blacks who are also unemployed and turning to crime there a lot of very unhappy South Africans, black and white. Some Afrikaners are campaigning to set up an independent state in the Orange Free State province to break away from the mess. It is very unlikely that things will sort themselves soon. The next election will be very interesting. If ANC haven't sorted things out by 2002 another party Inkatha, the nationalists even the communists may come to power. Extremists may also try to take over using violence. Whatever the outcome the future of South Africa is set to be as complex, full of problems and maybe as violent as its history. ...read more.