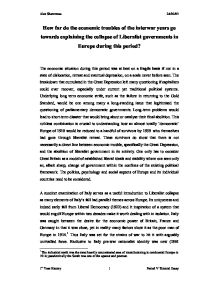 How far do the economic troubles of the interwar years go towards explaining the collapse of Liberalist governments in Europeduring this period?

How far do the economic troubles of the interwar years go towards explaining the collapse of Liberalist governments in Europe during this period? The economic situation during this period was at best on a fragile basis if not in a state of dislocation, retreat and eventual depression, on a scale never before seen. The breakdown that cumulated in the Great Depression left many questioning if capitalism could ever recover, especially under current yet traditional political systems. Underlying long term economic strife, such as the failure in returning to the Gold Standard, would be one among many a long-standing issue that legitimised the questioning of parliamentary democratic governments. Long-term problems would lead to short-term disaster that would bring about or catalyse their final abolition. This ruthless combination is crucial to understanding how an almost totally 'democratic' Europe of 1918 would be reduced to a handful of survivors by 1939 who themselves had gone through liberalist retreat. These survivors do show that there is not necessarily a direct line between economic trouble, specifically the Great Depression, and the abolition of liberalist government in its entirety. One only has to consider Great Britain as a model of established liberal ideals and stability where one sees only an, albeit sharp, change of government within the confines of the existing political framework. The politics, psychology and social aspects of Europe and its individual countries need to be considered. A succinct examination of Italy serves as a useful introduction to Liberalist collapse as many elements of Italy's fall had parallel themes across Europe. Its uniqueness and indeed early fall from Liberal Democracy (1922) and it inspiration of a system that would engulf Europe within two decades make it worth dealing with in isolation. Italy was caught between the desire for the economic power of Britain, France and Germany in that it was close, yet in reality many factors show it as the poor man of Europe in 1914.1 Thus Italy was set for the strains of war to hit it with arguably unrivalled force. ...read more.

Deep existing debts meant Europe and specifically Germany could do nothing but default its entire portfolio of loans that America rapidly pulled in. Statistics across boarders and industries began to tell a shattering catalogue of economic ruin typified in the most politically potent economic indicator, unemployment. Historically unmatched economic ruin came at a time of similarly unmatched political power of the masses. By 1933 the Great Depression left the foundations of Liberal economic thinking in ruins. Many, not least Keynes argued that orthodox economic policies were making the Depression worse. Thus Liberal governance in an age of increased importance of public opinion, itself a monument to liberalism's success, was perceived as a farce. Political ramifications could be nothing but dramatic and rapid. Within a few short years the 1920s spirited attempt at returning the world economy to that of 1913 was now unthinkable.4 Outside of fascism and communism the only alternatives were in their infancy and while they could maintain democracy they would still see a big retreat of Liberalist economic thinking. No formal set of policies were in place for a thoroughly convincingly and effective move yet, merely an understanding that this can never be allowed to happen again. Sweden in its social-democratic policy after 1932 and Keynes' General Theory of Employment, Interest and Money in 1936 laid foundation in this direction that would see wide acceptation and success only in post 1945 Europe. Psychologically the Great Depression had a massive impact. Intellectuals, activists and ordinary citizens were united in the belief that something was fundamentally wrong with the liberalist democratic world they lived in.5 Confidence in this world and its institutions of traditional economic expertise was eroded in politically stable nations but collapsed and ended in those less fortunate. People this disillusioned could quite rationally turn to alternatives that only with modern day hindsight seem irrational. Be they communist, fascist or prudent but massive government intervention such as the National Conservative Government's policies in Britain. ...read more.

It could no longer operate within the institutional framework of liberalist government. Only through force and authoritarianism could it maintain itself, fascism being one of several methods for this. Whether this was the case or not is generally irrelevant in an age of mass politics perception and belief became a greater force for change then fact and truth. In an age of both attempted proportional representation and an irreconcilable Left and Right it is not surprising to see Democracy in Austria, Germany and Spain fall under these pressures. In some otherwise stable democracies opposing ethnic, race or religious peoples within a state would see the demise of their governments as in the case of Czechoslovakia in the 1930s. Economic trouble cumulating in the Great Depression was the fuel and more often then not the spark that set the stage for Liberal collapse. In the ensuing fire Liberalist economics had to jump, whether liberalist government jumped next was dependant on the formers ability to control the firestorm. Peaceful change rested on both the level of assurance afforded to the political system by its citizens and confidence in itself. Innate to Democracy's legitimacy is its sense of evolution from within its own peoples and nations. Few of interwar Europe's democracies enjoyed this level of establishment thus their citizens at best had a shallow affinity with it. Government's existence rested solely on economic success as only that could reconcile a politically disenchanted people. The pillars of nineteenth Century economy had profound and system damaging effects on nation's politics in the 1920s and 1930s. Government's enshrined role to only check the power of institutions gave them no mechanism to take their command in peacetime. The attempt to return to a world built up on free trade, laissez-faire economics and minimal political intervention had little hope of functioning when government came to be required as the engine of society. It was designed as nothing more then the breaks.15 With the collapse of wealth in the Great Depression or at least the collapse of the framework to keep generating it the end of liberalist government was certain. ...read more.