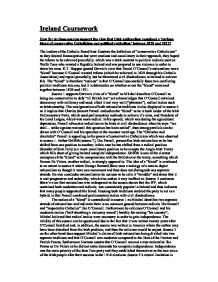 How far do these sources support the view that Irish nationalism remained a 'curious blend of conservative Catholicism and political radicalism' between 1820 and 1921?

Ireland Coursework How far do these sources support the view that Irish nationalism remained a 'curious blend of conservative Catholicism and political radicalism' between 1820 and 1921? The leaders of the Catholic Board best illustrate the definition of "conservative Catholicism" as they desired Emancipation but were cautious and conciliatory in their approach, they hoped for reform to be achieved peacefully, which was a stark contrast to political radicals such as Wolfe Tone who wanted a Republic Ireland and was prepared to use violence in order to attain his aims. K.T. Hoppen quoted Garvin's view that Daniel O'Connell's nationalism was a "blend" because O'Connell wanted reform (which he achieved in 1829 through his Catholic Association) and repeal peacefully, but he threatened civil disobedience in Ireland to achieve this. The "blend" is therefore "curious" in that O'Connell successfully fuses two conflicting political traditions into one, but it is debateable on whether or not the "blend" remained together between 1820 and 1921. Source 1 supports Garvin's view of a "blend" as Mitchel describes O'Connell as being too conservative to defy "all British law" yet acknowledges that O'Connell entwined democracy with militancy and used, albeit it not very well ("phantom"), radical tactics such as brinkmanship. ...read more.

Griffith is one of the clearest examples of the "blend" as he compromises with the British over the treaty, something which Eamon De Valera, another radical, is strongly opposed to. The idea of a "blend" is continued to an extent in source 6 where George Bernard Shaw uses a analogy of a man to depict nationalism as though it were one movement and thus does not distinguish any separate strands. He also concludes nationalism to be curious as he calls it "twaddle" and states that it is anti-progressive and unhealthy, which also makes it very ineffective. Source 5 continues Shaw's view that nationalism was widespread as the source shows that the IPP, which contained both moderates and radicals, was consistently popular in Ireland and thus indicates that many people supported this blend. Housing both traditions enabled the party to act as a hybrid, in that Parnell combined parliamentary tactics with civil disobedience. The notion of a "blend" is contradicted in source 1 as Mitchel identifies two separate strands of nationalism and indicates there is no common ground between radicals like himself and "respectable Catholics" like O'Connell. ...read more.

The formation of the Sinn Fein party is a clear indication of the blend dissolving, as there were now two political parties with their own views on nationalism and one was more successful than the other. This split within nationalism is also depicted in source 7 where De Valera and Griffith both have different views regarding the Anglo-Irish treaty; hence demonstrates the end of the blend in 1921. To an extent, many of the sources identify a "curious blend" within Irish nationalism; figures such as O'Connell and Parnell embody the two very different political traditions, which was "curious" in that the traditions were two complete opposites. The "blend", which remained just over the period, was not equal as both men came from "conservative Catholic" backgrounds and both had tried to implement this approach in the beginning, but after seeing the futility of "conservative Catholicism" they began to use "political radicalism". Over time, the sources suggest that "political radicalism" became more dominant with the rise of the Fenians and Sinn Fein, thus by 1921 the "blend" had all but dissolved. ...read more.