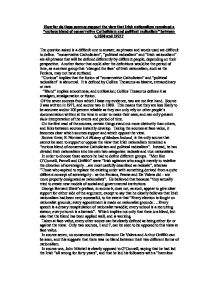 How far do these sources support the view that Irish nationalism remained a &quot;curious blend of conservative Catholicism and political radicalism&quot; between c.1820 and 1921?

How far do these sources support the view that Irish nationalism remained a "curious blend of conservative Catholicism and political radicalism" between c.1820 and 1921? The question asked is a difficult one to answer, as phrases and words used are difficult to define. "conservative Catholicism", "political radicalism" and "Irish nationalism" are all phrases that will be defined differently by different people, depending on their perspective. Another factor that could alter the definitions would be the period of time, as a certain group that 'changed the face' of Irish nationalism, such as the Fenians, may not have surfaced. "Curious" implies that the fusion of "conservative Catholicism" and "political radicalism" is abnormal. It is defined by Collins Thesaurus as bizarre, extraordinary or rare. "Blend" implies smoothness, and unification; Collins Thesaurus defines it as amalgam, amalgamation or fusion. Of the seven sources from which I base my evidence, two are not first hand. Source 3 was written in 1971, and source two in 1989. This means that they are less likely to be accurate and/or 100 percent reliable as they can only rely on other people's documentation written at the time in order to make their case, and can only present their interpretation of the events and period of time. ...read more.

Which implies not only that there is a blend, but also that the blend has been applied well, and is working. Taken at face value, every other source can be clearly defined as being either for or against the view. Only two sources, 1 and 7, can be seen to be opposed to this view at face value. In source seven, no consensus between Eamonn De Valera and Arthur Griffith can be seen, and this suggests that there was no blend between their two different forms of nationalism. In source one, John Mitchel is clearly opposed to O'Connell, saying that he had led the Irish "all wrong for forty years", and that he led his followers with a "harmless exhibition of numerical force, by imposing demonstrations (which are fatal nonsense) and by eternally half-unsheathing a visionary sword". If the sources are examined more clearly, and deeply more and more links become apparent. There is a link between sources four and five, as both show that different groups have been united. In source four, a speech made by Charles Stewart Parnell, albeit edited by a newspaper, shows Parnell trying to bring the people of Ireland together into a cohesive party, one that will obtain Home Rule. ...read more.

Despite first impressions, sources 1, 2 and 7 show links with one another. In source one, despite the fact that at first it looks as though Mitchel is very anti-O'Connell, it is known for a fact that originally, he supported O'Connell, and that they had worked together up until 1847 when the combination broke down when O'Connell died. This source links with source two, as source two suggests that rather than the smooth "blend" between conservative Catholicism and political radicalism mentioned, the fusion was far more of a volatile mixture of different beliefs and methods. Hoppen also suggests that the blend was always going to break down, and when it did, all that was left was a polarisation of O'Connellites and anti-O'Connellites. Source seven links to these as, again, this looks on the surface to be a clearly unpredictable set of speakers talking about subjects that they both have opposing views upon. However, Griffith and De Valera were happy working side by side, and when this broke down, it resulted in civil war in Ireland. This source suggests that rather than Irish nationalism being a blend of conservative Catholicism and political radicalism, it was been a blend of Catholic radicalism. ...read more.