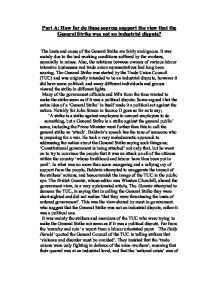 How far do these sources support the view that the General Strike was not an industrial dispute?

Part A: How far do these sources support the view that the General Strike was not an industrial dispute? The basis and cause of the General Strike are fairly ambiguous. It was mainly due to the bad working conditions suffered by the workers, especially in mines. Also, the relations between owners of various labour intensive businesses and trade union representatives had long been souring. The General Strike was started by the Trade Union Council (TUC) and was originally intended to be an industrial dispute, however it did have some political; and many different individuals and groups viewed the strike in different lights. Many of the government officials and MPs from the time wanted to make the strike seem as if it was a political dispute. ...read more.

In what was no more than scare mongering and a rallying cry of support from the people, Baldwin attempted to exaggerate the impact of the strikers' actions, and hence tarnish the image of the TUC in the public eye. The British Gazette, whose editor was Winston Churchill, shared the government view, in a very opinionated article, The Gazette attempted to demean the TUC, in saying that in calling the General Strike they were short-sighted and did not realise 'that they were threatening the basis of ordered government'. This was the view shared by most in government. who suggest that the General Strike was not an industrial dispute, rather it was a political one. It was mainly the strikers and members of the TUC who were trying to make the General Strike not seem as if it was a political dispute. ...read more.

It is the diary of the neutral who gives an excellent perspective, in challenging the methods of the TUC she highlights, like Sir John Simon, that despite good intentions, the nature of a General Strike means that it is a challenge to the nation as a whole because it affects more than just the mine owners. Evidence taken from sources who could be seen to be partial to one of sides involved means that their reliability could be questioned. Therefore, it is the factual evidence within the sources and the neutral source that goes to show that despite the General Council's best intentions, and even if the strikers' conduct was excellent then the General Strike could not be executed at only an industrial dispute level. However, its consequences were always going to be quite a way from Baldwin's and the Gazette's apocalyptic visions. ...read more.