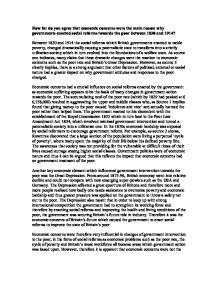 How far do you agree that economic concerns were the main reason why governments enacted social reforms towards the poor between 1830 and 1914?

How far do you agree that economic concerns were the main reason why governments enacted social reforms towards the poor between 1830 and 1914? Between 1830 and 1914 the social reforms which British governments enacted to tackle poverty, changed dramatically causing a paternalistic state to transform into a strictly utilitarian society which in turn evolved into the foundations of a welfare state. As source one indicates, many claim that these dramatic changes were the reaction to economic concerns such as the poor rate and Britain's Great Depression. However, as source 3 clearly implies, there is a strong argument that other factors of political, external or social nature had a greater impact on why government attitudes and responses to the poor changed. Economic concerns had a crucial influence on social reforms enacted by the government as economic suffering appears to be the basis of many changes in government action towards the poor. The accumulating total of the poor rate (which by 1829 had peaked at � 6,758,000) resulted in aggravating the upper and middle classes who, as Source 1 implies found that giving money to the poor caused 'indolence and vice' and actually harmed the poor rather than helped them. ...read more.

However, therefore it is apparent that economic concerns were not the motivation behind changes in government treatment and acted as problems to be solved rather than the reason why the government changed its policies. In order to be able to understand how the government transformed so radically one must be aware of the political, external and social climate between 1830 and 1914. Political factors played a key role in the reasons why governments enacted social reforms between 1830 and 1914. The expansion of the electorate in 1832, 1867 and 1884 meant that the government had to tailor their policies to please their voters. Especially in 1884 when the franchise was extended to the majority of British males, including those of working class background, the government needed to offer a service which would keep them in power. Therefore one must be aware that although economic concerns were the area which the government targeted, they were not the main reason to why governments changed their social policies. Fear of revolution in 1830 also meant that government limited social reforms as a measure of control and in 1900, as source 3 suggests, the fear of socialism which surfaced in Britain as the Labour Party was another major reason for government action. ...read more.

for example as source 2 indicates with more specific classification of those suffering economic hardship such as children and the elderly, the government were able target their policies to ease economic suffering; for instance the issuing the National Insurance Act 1911 to tackle poverty at old-age. As in the 1830s these social reformers along with others such as Dickens contributed to the growing discomfort of the higher social classes that the government were not doing enough to help the poor. Therefore social elements added to the climate in which the government was forced to act through social reforms whether they restricted or greatened the conditions of those in poverty. In conclusion, it is clear that although economic concerns were of great importance and did have many strong effects they were the areas which the government had to tackle rather than the main reason behind why social reforms were enacted. The majority of social reforms issued by governments were not based on genuine concern for the economic suffering of the popular, they were reactions to political crises and played the role of giving the government power. Without political and external motivation one cannot assume that the government would have responded to the economic situation of Britain, even with the help of social reformers. ...read more.