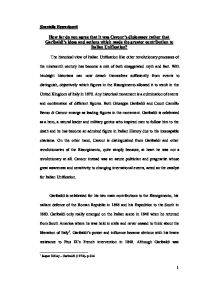 How far do you agree that it was Cavour's diplomacy rather that Garibaldi's ideas and actions which made the greater contribution to Italian Unification?

Shantalie Hewavisenti How far do you agree that it was Cavour's diplomacy rather that Garibaldi's ideas and actions which made the greater contribution to Italian Unification? The historical view of Italian Unification like other revolutionary processes of the nineteenth century has become a mix of both exaggerated myth and fact. With hindsight historians can now detach themselves sufficiently from events to distinguish, objectively which figures in the Risorgimento allowed it to result in the United Kingdom of Italy in 1870. Any historical movement is a culmination of events and combination of different figures. Both Giuseppe Garibaldi and Count Camillo Benso di Cavour emerge as leading figures in the movement. Garibaldi is celebrated as a hero, a natural leader and military genius who inspired men to follow him to the death and he has become an admired figure in Italian History due to his inescapable charisma. On the other hand, Cavour is distinguished from Garibaldi and other revolutionaries of the Risorgimento, quite simply because, at heart he was not a revolutionary at all. Cavour instead was an astute politician and pragmatist whose great awareness and sensitivity to changing international events, acted as the catalyst for Italian Unification. Garibaldi is celebrated for his two main contributions to the Risorgimento, his valiant defence of the Roman Republic in 1848 and his Expedition to the South in 1860. Garibaldi only really emerged on the Italian scene in 1848 when he returned from South America where he was held in exile and never ceased to think about the liberation of Italy1. Garibaldi's power and influence became obvious with his brave resistance to Pius IX's French intervention in 1848. Although Garibaldi was ultimately defeated by Napoleon he still emerged as hero. In the public eye, Garibaldi was perceived as a romantic hero and he coined the phrase 'Roma o morte'. He inspired the masses through his adventures like no other revolutionary nationalist had done previously. ...read more.

It stated France would come to Piedmont's aid if Austria was the aggressor. Seaman categorises this compromise as the singularly most important factor to Italian Unification. This view is valid because had it not been for the 1859 war against Austria, Austrian influence would never have been expelled from the peninsula. This illustrates that it was through Cavour's diplomatic negotiations that unification became more realistic. It is important to realise that Cavour's attitude towards Italy displayed how his flexibility allowed his ideas to develop in a fashion that was ultimately beneficial for Italy. Cavour's actions led to the creation of the fundamental geographical foundations for a unified Italy in the formation of the 'Kingdom of Northern Italy'. Although there is little debate surrounding the importance of northern unification the fact that Cavour ceded Nice and Savoy over to France was seen a great betrayal by Italians especially Garibaldi as it displayed a lack of devotion to the Italian cause. However, this deficiency on Cavour's part was counteracted by Garibaldi's enthusiasm to recapture his hometown, Nice and so he set off on his expedition to the South where he unified Naples and Sicily. Another of Cavour's positive attributes that is forwarded by Denis Mack Smith was that he knew his own limitations and was aware of other figure's opinions of him illustrated by the following quotation: 'Cavour was much aware of the fact that he had come into politics with little experience of administration ...this remained one of the main charges against him'.12 Cavour was highly sensitive to the political climate. His pragmatic approach even though unpopular with his contemporaries, was his strongest attribute and enhanced the Unification movement. In contrast, Garibaldi's passion for unification blinded him to the stark reality of international sensitivities and this ironically led to his downfall. Jasper Ridley claims that Garibaldi was 'a great commander but not a great general'13. ...read more.