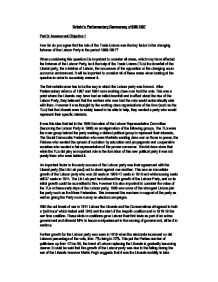 How far do you agree that the role of the Trade Unions was the key factor in the changing fortunes of the Labour Party in the period 1888-1997?

Britain's Parliamentary Democracy c1888-1997 Part B: Assessment Objective 1 How far do you agree that the role of the Trade Unions was the key factor in the changing fortunes of the Labour Party in the period 1888-1997? When considering this question it is important to consider all areas, which may have affected the fortunes of the Labour Party, be it the help of the Trade Unions (TUs) the downfall of the Liberal party, the mistakes of Labour, the successes of the opposition or the changing socio-economic environment. It will be important to consider all of these areas when looking at the question in order to accurately answer it. The first notable area has to be the way in which the Labour party was formed. After Parliamentary reforms of 1867 and 1884 more working class men had the vote. This was a point where the Liberals may have had an initial downfall and in effect aloud the rise of the Labour Party, they believed that the workers who now had the vote would automatically side with them. However it was thought by the working class organisations of the time (such as the TUs) that the Liberals were to widely based to be able to help, they wanted a party who would represent their specific interests. ...read more.

It can be seen that while the weakness of the Liberals was important it is also important to consider the strength of Labour, and its strong Union backing. While the general passed while the Conservatives were in office a noticeable point is the silence of Labour not seen to be supporting the strikers, this shows perhaps an early separation from Labour and the TUs. Labours second term can perhaps be accredited to the poor performance of the Conservatives leading up to the General strike, this does of course mean that by striking the Unions opened the door for Labour to return to office. Labours second term unfortunately feel during the depression, it can be seen that Labour in trying to support the unemployed hurt itself by eventually running out of funds, and then having to attempt to bring in policy which could be seen as Conservative to control it, this caused the party to be divided and ultimately hurt the Party for the rest of the decade, here it is apparent that it was not the Unions involved in the fall of Labour but instead the Parties own fault. The Conservatives and Coalition type governments dominated the 30's. During the war years however Labour were given a further opportunity to show how successfully they could run the country, all be it on a war time economy. ...read more.

This stabilised the economy but this led to 1.6 million people in unemployment this led to a major rift between the Unions and the party. The period of Conservative rule starting in 1979, Margaret Thatcher decided to end the rule of the Unions. In 1984-85 Labour did not support the miners in their strike showing the changed relationship between the party and the Unions. When the Strike collapsed Thatcher aided Rupert Merdoch the man behind the Sun and Times newspapers in destroying the print Union one of the strongest in the country. Labour once again did not step in and aid the union. However this was perhaps a mistake because Labour did not see government again until 1997 and Anthony Blair with new Labour. It is clear that the Trade Unions did affect the success of the Labour Party from its formation in 1906 onwards. However it would be ridiculous to say that the Trade Unions were the only reason for the Parties success, and to do so you would have to over look factors such as the failing of the Liberals and Labours ability to Govern. Throughout its first 50 years it would be fair to say that the Trade Unions were very important to the Party in terms of funding and member ship however if it wasn't for opportunities such as the Wars for Labour to prove itself it may never have reached the point it is at today. ...read more.