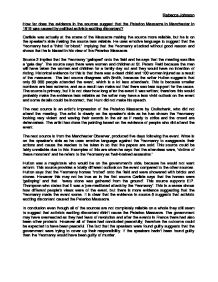 How far does the evidence in the sources suggest that the Peterloo Massacre in Manchester in 1819 was caused by political activists exciting discontent?

Rebecca Johnson How far does the evidence in the sources suggest that the Peterloo Massacre in Manchester in 1819 was caused by political activists exciting discontent? Carlisle was actually at the scene of the Massacre making the source more reliable, but he is on the speaker's side making the source less reliable. He uses emotive language to suggest that the Yeomanry had a 'thirst for blood.' Implying that the Yeomanry attacked without good reason and shows that he is biased in his view of the Peterloo Massacre. Source 2 implies that the Yeomanry 'galloped' onto the field and he says that the meeting was like a 'gala day'. The source says there were women and children at St. ...read more.

The next source is an artist's impression of the Peterloo Massacre by Cruikshank, who did not attend the meeting. The artist is clearly on the speaker's side as he has shown the Yeomanry looking very violent and waving their swords in the air as if ready to strike and the crowd are defenceless. The artist has done the painting based on the evidence of people who did attend the event. The next source is from the Manchester Observer, produced five days following the event. Wroe is on the speaker's side as he uses emotive language against the Yeomanry to exaggerate their actions and cause the readers to be taken in so that the papers are sold. ...read more.

This in a sense shows how different people's views were of the event, but there is more evidence suggesting that the Yeomanry made the event worse. It is clear that the evidence in source 5 suggests that activists exciting discontent caused the Peterloo Massacre. In conclusion even though all of the sources are not completely reliable on a whole they still seem to suggest that activists exciting discontent didn't cause the Peterloo Massacre. The government may have overreacted as they had fears of revolution and after the events in France there had also been other protests. However all of these had concluded peacefully; therefore the outcome could be expected to have been peaceful. The fact that the speakers were found guilty suggests that the government were trying to cover up their responsibility. If the speakers hadn't been found guilty then the Yeomanry would have been guilty of murder. ...read more.