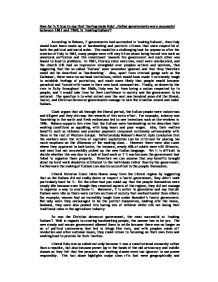 How far is it true to say that 'having made Italy', Italian governments were successful between 1861 and 1960, in 'making Italians'

How far is it true to say that 'having made Italy', Italian governments were successful between 1861 and 1960, in 'making Italians'? According to Robson, if governments had succeeded in 'making Italians', then Italy would have been made up of hardworking and patriotic citizens that were respectful of both the political and social order. This would be a challenging task for anyone as after the creation of Italy in 1861, many people were still very bitter about being forced into such an unnatural unification and this resentment towards the government and each other was bound to lead to problems. In 1861, literacy rates were low, most were uneducated, and the church still had an impressive stronghold over peoples actions and opinions, thus suggesting that the so called 'Italians' were somewhat ignorant and that they therefore could not be described as 'hardworking'. Also, apart from criminal gangs such as the Carbonari, there were no national institutions, which would have made it extremely tough to establish feelings of patriotism, and much more likely that people would become parochial and fixated with issues in their own local communities. Finally, as shown by the riots in Sicily throughout the 1860s, Italy was far from being a nation respected by its people, and it would take time for their confidence in society and the government to be restored. ...read more.

factories or shops, whereas the working class peasants in the south found themselves in an area that was still very much poor and underdeveloped. Furthermore they were still resentful of the north as they considered the 1861 unification as a takeover by Piedmont. Divisions between north and south, town and country, and rich and poor, meant that achieving a sense of national pride or patriotism was near on impossible. Clark however disputes this view by suggesting that there was in fact evidence of considerable unity by 1914. For one thing, the 'Italian' language was used widely for communication particularly among those in towns or the army, and because most people had now gone through some form of 'patriotic propaganda' at school, the Italian people were beginning to associate with ideas outside their local community. This development was helped by the building of a national economy connected by roads and railways that allowed them to visit and find out about other areas in their new country. Yet Robson challenges Clark, and argues that there was still 'no national spirit' pulling the people together. Therefore it seems possible to conclude that by the end of the Liberal governments reign in 1914, the first few vital steps had been taken towards aiding the creation of a truly patriotic nation, but the people had not yet been won over and did not yet feel completely 'Italian' as local loyalties still remained. ...read more.

This shows that 'Italians', according to Robson, had still not been successfully created by 1944 as they were not respectful of the political and social order because they were causing mass turmoil without much thought as to how it would effect their nation. After systematically assessing to what degree the three government regimes managed to 'make Italians', it is clear to see that some were more successful than others. It appears that it was in fact the fascist system that helped teach the people of Italy how to pull together and work towards a mutual goal. However, as many did not see fascism as their goal, Mussolini was not truly victorious at making hardworking, patriotic citizens that were respectful of the political and social order. It was ultimately during the Christian democrat reign that most traces of rebellion, idleness, and parochial tendencies disappeared, and the pace of change from Italian people to 'Italians' really quickened. The main problem with this, is the length of time it took. If the individuals of Italy were ever going to become complete Italians, then it should have been easier to achieve, whereas it actually took about one hundred years. Therefore perhaps this suggests that all of the political upheaval and controversy throughout this era essentially inhibited this natural process rather than encouraging it. Word count = 1750 ?? ?? ?? ?? ...read more.