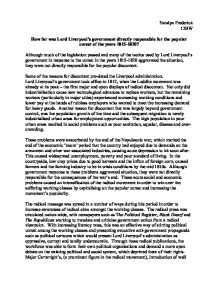 How far was Lord Liverpool's government directly responsible for the popular unrest of the years 1815-1820?

Natalya Frederick 12BW How far was Lord Liverpool's government directly responsible for the popular unrest of the years 1815-1820? Although much of the legislation passed and many of the tactics used by Lord Liverpool's government in response to the unrest in the years 1815-1820 aggravated the situation, they were not directly responsible for the popular discontent. Some of the reasons for discontent pre-dated the Liverpool administration. Lord Liverpool's government took office in 1812, when the Luddite movement was already at its peak - the first major and open displays of radical discontent. Not only did industrialisation cause new technological advances to replace workers, but the remaining workers (particularly in major cities) experienced worsening working conditions and lower pay at the hands of ruthless employers who wanted to meet the increasing demand for heavy goods. Another reason for discontent that was largely beyond government control, was the population growth of the time and the subsequent migration to newly industrialised urban areas for employment opportunities. The high population in poor urban areas resulted in social problems such as poor sanitation, squalor, disease and over-crowding. These problems were exacerbated by the end of the Napoleonic war, which marked the end of the economic 'boom' period that the country had enjoyed due to demands on the armament and other war associated industries, causing acute depression to hit soon after. ...read more.

The radicals added to the social unrest through the stirring of discontent and indicating to the working classes that by pressing the government for political reform, an end to their problems would come, thus encouraging them to participate in Radical activity. For example, the Luddite movement and Spa Field Riots (open-air meetings as a form of protest). Lord Liverpool's response to the popular unrest further aggravated the situation. The introduction of the Corn Law in 1815 was in order to guarantee landowner profits at a level to which they had become accustomed during the boom years of the war. However the radicals and working classes saw it as a piece of class legislation by saving upper class landowners from cheaper foreign grain, stabilising prices and making it more expensive for the consumer. The consequences were riots, petitions and demonstrations, thus worsening general discontent. Another piece of legislation that was viewed by the radicals as being blatant protection of the upper classes, was the Income Tax Repeal of 1816. This saw the income-based tax (the more you earn, the more you pay) being abolished by the aristocratically dominated government, who had born the brunt of the tax. In order to fill the gap in the revenue, indirect taxation was increased on popular items such as beer and sugar, a measure which hit the poor even harder than the Corn Law as they used these items on a regular basis. ...read more.

For example urbanisation and industrialisation were new social occurences in the name of progress. It would have been unprecedented for a government to behave any differently to the way in which lord Liverpool's administration did. The government passed legislation such as the Suspension of the Habeas Corpus in order to attempt to maintain law and order, which they, and any government of the time felt was their primary responsibility (above the solving causes of the unrest itself). This heavy-handed approach to dealing with the discontented situation would have been directly related to fear of a revolution similar to the French occuring in Britain and in protection of the upper classes who were the support and make-up of Lord Liverpool's administration, and thus to be expected. In addition, the extent of the government use of spies is questionable, because there was much differing of opinion in the interpretations of their use, with some believing that some spies took it upon themselves to incite radical behaviour, outside of their governmental orders (just to spy on radical operations). Another major issue, is that the government was not directly responsible for the unrepresentative electoral system which was the radical movement's major opposition to the administration, as it pre-dated them. The economic legislation that they passed, did not make them directly responsible because it was the post-war depression and good corn harvests that caused the economic problems, their laws aggravated the situation rather than caused it. ...read more.