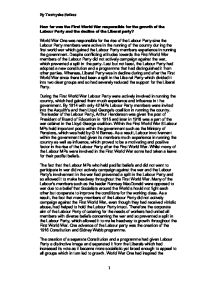 Lastly, the Sidney Webb programme had consisted of proposal on heavier taxation on larger incomes, nationalisation of key industries and introduction of a minimum wage and working conditions. As a result, the introduction of a new constitution and a programme had given Labour Party a distinctive image as it was separated out of all political parties especially the Liberals, which helped it to utilise its support amongst the workers especially after the introduction of the Representation of the Peoples Act in 1918 which had given women and workers the vote, which the Labour Party wasn't able to do before the First World War. As historian Malcolm Smith argues that it was the effects of the First World War was responsible for the decline of the Liberals caused by the split in the Liberal party between Lloyd George and Asquith, which had tremendously reduced the support for the Liberals. Lloyd George had been appointed Minister for war in 1916 by the death of Lord Kitchener in Asquith's coalition. In 1916 Lloyd George proposed a smaller war cabinet, which proved controversial as it denounced Asquith's involvement in the war. ...read more.

In conclusion, the First World War had led to the growth of the Labour Party due to Labour experience in running the country during the First World War, cooperation between members of the Labour party who had conflicting views in war, and the introduction of a new constitution and a programme in 1918. Whereas, a split in the Labour Party in 1906 between Lloyd George and Asquith had not concentrated on gaining the support of the voters but rather on opposing each other. The coalition with Conservatives showed that Labour Party had gone into a decline. Overall, the most important factor for the rise of the Labour party had been the introduction of the 1918 Constitution and a programme, which had distinguished Labour Party from the Liberals and therefore through its vagueness appealed to many socialist groups who had increased their support for the Labour Party. Whereas, the cooperation between members within the party kept the party alive but did not necessarily achieve success. Whereas, the decline of the Liberals was due to one and foremost factor which was a split in the Liberal Party between Asquith and Lloyd George, which reduced cooperation for working towards one goal as both individuals had diverse beliefs that had divided the party. ?? ?? ?? ?? By Tautvydas Sutkus 1 ...read more.