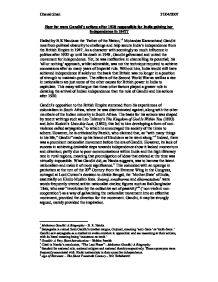 How far were Gandhi's actions after 1920 responsible for Indiagaining her independence in 1947?

How far were Gandhi's actions after 1920 responsible for India gaining her independence in 1947? Hailed by B.R Nanda as the 'Father of the Nation,'1 Mohandas Karamchand Gandhi rose from political obscurity to challenge and help secure India's independence from the British Empire in 1947. As a character with seemingly so much influence in politics after 1920 up until his death in 1948, Gandhi galvanised and united the movement for independence. Yet, he was ineffective in channelling its potential; his 'all or nothing' approach, whilst admirable, was not the technique required to achieve concessions after so many years of Imperial rule. Without him, India would still have achieved independence if solely on the basis that Britain was no longer in a position of strength to maintain power. The effects of the Second World War as well as a rise in nationalism are just some of the other causes for British power in India to capitulate. This essay will argue that these other factors played a greater role in dictating the arrival of Indian independence than the role of Gandhi and his actions after 1920. Gandhi's opposition to the British Empire stemmed from his experiences of colonialism in South Africa, where he was discriminated against, along with the other members of the Indian minority in South Africa. The basis for his actions was shaped by recent writings such as Leo Tolstoy's The Kingdom of God Is Within You (1893) and John Ruskin's Unto this Last, (1862); this led to him developing a form of non-violence called satyagraha,2 to which he encouraged the society of the times to adhere. However, he is criticised by Parekh, who claimed that, as "with many things in his life," Gandhi "made up his brand of Hinduism as he went along."3 Indeed, there was a prominent nationalist movement before the era of Gandhi. However, its lack of success in achieving desirable steps towards independence show it lacked momentum and direction; partly due to poor communications within India and the high illiteracy rate in rural regions, meaning that promulgation of ideas that existed at the time was virtually impossible. ...read more.

However, 1927 saw Lord Birkenhead, the new Secretary of State for India call for a review of the 1919 Act, which included a provision for parliamentary review after ten years. The significance of this, however, was that the commission which was entrusted with conducting the review contained no Indian members. The Congress, which, despite having much more political power than it had enjoyed in its history, and Gandhi, who in these circumstances rejoined the Congress ranks, could do little to stop the commission carrying out its review, except protest. The following year saw the Congress concluded a more aggressive stance, after the Commission concluded in its findings that government for India should be kept at provincial level. Its 1928 meeting declared that the party would push for complete independence. Lord Irwin, the new Viceroy persuaded Baldwin that a declaration of dominion status "was the goal of British policy" and called for Round Table Conferences to consider the next steps. Therefore, as Spears states, it puzzled many when such a great advance on the British side was met by direct action by the Congress. However, he concurred that accepting the compromise may split the Congress altogether, forcing Gandhi himself to take measures of his own against the British. The Salt Tax levied by the British on the Indians in 1930 saw Gandhi respond by walking 240 from Ahmedabad to the coastal town of Dandi, where he was arrested for gathering salt. Congress gave support to Gandhi by calling upon all of its followers to break the salt laws. Soon, processions, arrests, hartals, and occasional riots were widespread across India. In the course of that year some hundred thousand went to prison. Lord Irwin was forced to release Gandhi in 1931, enabling him to attend the second of the Round Table Conferences. However, he failed to impress the delegates at the conference, and, there were more pressing financial issues at home; Nanda highlighted that the "financial crisis was for it (the British public) ...read more.