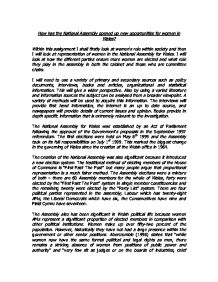 How has the National Assembly opened up new opportunities for women in Wales?

How has the National Assembly opened up new opportunities for women in Wales? Within this assignment I shall firstly look at women's role within society and then I will look at representation of women in the National Assembly for Wales. I will look at how the different parties ensure more women are elected and what role they play in the assembly in both the cabinet and those who are committee chairs. I will need to use a variety of primary and secondary sources such as policy documents, interviews, books and articles, organizational and statistical information. This will give a wider perspective. Also by using a varied literature and information sources the subject can be analysed from a broader viewpoint. A variety of methods will be used to acquire this information. The interviews will provide first hand information, the internet is an up to date source, and newspapers will provide details of current issues and opinion. Books provide in depth specific information that is extremely relevant to the investigation. The National Assembly for Wales was established by an Act of Parliament following the approval of the Government's proposals in the September 1997 referendum. The first elections were held on May 6th 1999 and the Assembly took on its full responsibilities on July 1st 1999. This marked the biggest change in the governing of Wales since the creation of the Welsh office in 1964. ...read more.

Labour has most AMs (twenty-eight in total) and fifty-seven percent are female (fifteen); the Liberal Democrats (total six) have fifty percent female AMs (three); Plaid Cymru (total seventeen) have thirty-five percent female AMs (six) and there are no conservative female Assembly members (see fig 1). These statistics would appear to support the policies adopted by the parties. The graphs in figures 2 and 3 dramatically demonstrate the party political disparities in their female representation. It can be said that Labour has made great strides in both the House of Commons and the Assembly. However, the positive discrimination measures e.g. women only shortlists have been very controversial. Yet when no positive interventions occur e.g. the Conservative Party the lack of female members is extremely apparent. What is also significant is that women have reached quite senior positions. The cabinet has nine members, five of which are female which represents fifty-six percent - this is extremely significant as it equalizes the power imbalance. The portfolios of ministers are as follows: Jane Hutt - Health and Social Services Edwina Hart - Finance and Local Government Jane Davidson - Education and Lifelong Learning Jenny Randerson - Culture, Sport and the Welsh Language Sue Essex - Environment There are seven subject committees, three of which are chaired by women: Health and Social Services - Kirsty Williams Local Government and Housing - Gwenda Thomas Economic Development - Val Feld* (*Sadly, since writing this Val Feld has died.) ...read more.

Also, as Kirsty Williams pointed out, the Assembly has adopted a far more conciliatory style than Westminster, and she attributed this in part to the female influence. The female AMs have also highlighted that women can attain positions of power through merit, which can only be a positive influence on other sectors. Many female AMs also have experience of the 'caring' professions e.g. health and social care which has proved to be invaluable in addressing such issues as carer's rights, parental responsibilities, children's issues. Wales has led the way in appointing a Children's commissioner - a campaign that Jane Hutt had a keen interest in whilst at Chwarae Teg. Helen Mary Jones and Val Feld both worked for the equal opportunity commission prior to entering the Assembly and so had a wealth of knowledge and experience. In conclusion, I think that it can be said that the national Assembly has opened up new opportunities for women in Wales. However, it would appear to be a starting point. It is chipping away at the 'glass ceiling' rather than smashing it. There is no female party leader or first minister and 'positive' intervention has been needed to place women in positions of power. In the final analysis we will have to judge the long term effects for women when such tactics are no longer employed and women are judged on their merits alone as gender neutral prospective politicians. ?? ?? ?? ?? ...read more.