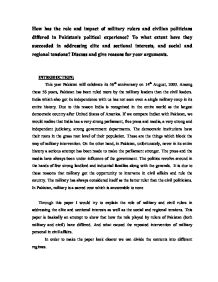 How has the role and impact of military rulers and civilian politicians differed in Pakistan's political experience? To what extent have they succeeded in addressing elite and sectional interests, and social and regional tensions?

How has the role and impact of military rulers and civilian politicians differed in Pakistan's political experience? To what extent have they succeeded in addressing elite and sectional interests, and social and regional tensions? Discuss and give reasons for your arguments. INTRODUCTION: This year Pakistan will celebrate its 56th anniversary on 14th August, 2003. Among these 56 years, Pakistan has been ruled more by the military leaders than the civil leaders. India which also got its independence with us has not seen even a single military coup in its entire history. Due to this reason India is recognized in the entire world as the largest democratic country after United States of America. If we compare Indian with Pakistan, we would realize that India has a very strong parliament, free press and media, a very strong and independent judiciary, strong government departments. The democratic institutions have their roots in the grass root level of their population. These are the things which block the way of military intervention. On the other hand, in Pakistan, unfortunately, never in its entire history a serious attempt has been made to make the parliament stronger. The press and the media have always been under influence of the government. The politics revolve around in the hands of few strong landlord and industrial families along with the generals. It is due to these reasons that military got the opportunity to intervene in civil affairs and rule the country. The military has always considered itself as the better ruler than the civil politicians. In Pakistan, military is a sacred cow which is answerable to none Through this paper I would try to explain the role of military and civil rulers in addressing the elite and sectional interests as well as the social and regional tensions. This paper is basically an attempt to show that how the role played by rulers of Pakistan (both military and civil) ...read more.

Although the Chief of the Army Staff do not talk about the country's foreign policy publicly but General Baig discussed the government's policy over Gulf War publicly and openly criticized America and supported Saddam and gave his famous doctrine of 'Strategic Defence'27. It was also known that both the army and the PM differed in their approach to Kashmir, US and even Sindh. But the main factor which annoyed the army and led to Nawaz Sharif's dismissal was "Sharif's solo flight in initiating peace process with India."28. The National Assembly was dissolved by the President but for the first time in the history of Pakistan it was restored by the Supreme Court. This decision of the court resulted in a political deadlock between the Prime Minister and the President. The military came in and brokered a deal where both the President and the PM resigned and new elections were held in October 1993. 29 8. The second Benazir's Government: Benazir started her second term as the Prime Minister after winning the 1993 elections and getting the largest number of seats in the National Assembly. A PPP nominated Senator Farooq Ahmad Leghari became the President of Pakistan. This time Benazir's relations with the military were much improved. She tried her best to avoid any kind of interference in the internal hierarchy of military and kept the major security and foreign policy matters as the main preference of her government. According to Hassan Askari, "What got the Bhutto government into trouble in 1996 was its abysmal performance in the civilian sector and its failure again to provide an effective and transparent administration"29. The ethnic violence in Karachi and Hyderabad intensified during 1995-96 when the MQM and the law enforcing agencies (police and rangers) confronted each other. The result was increased violence and killings of innocent people. There were incidents of unidentified gunmen killing innocent people and looting of government as well as private property. ...read more.