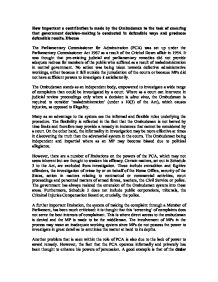 How important a contribution is made by the Ombudsmen to the task of ensuring that government decision-making is conducted in defensible ways and produces defensible results. Discuss The Parliamentary Commissioner for Adminstration (PCA) was set up under the Parliamentary Commissioner Act 1967 as a result of the Crichel Down affair in 1954. It was thought that pre-existing judicial and parliamentary remedies did not provide adequate redress for members of the public who suffered as a result of maladministration in central government. No action was being taken towards defective administrative workings, either because it fell outside the jurisdiction of the courts or because MPs did not have sufficient powers to investigate it satisfactorily. The Ombudsman stands as an independent body, empowered to investigate a wide range of complaints than could be investigated by a court. Where as a court can intervene in judicial review proceedings only where a decision is ultra vires, the Ombudsman is required to consider 'maladministration' (under s 10(3) ...read more.

The government has always resisted the extension of the Ombudsman system into these areas. Furthermore, Schedule 2 does not include public corporations, tribunals, the Criminal Injuries Compensation Board or, crucially, the police. A further important limitation, the system of making the complaint through a Member of Parliament, has been much criticised: it is thought that this 'screening' of complaints does not serve the best interests of complainant. This is where direct access to the ombudsman is denied and the MP is made to be the middleman. The involvement of MPs in the process may mean an inadequate working system since MPs do not possess the power to investigate in great detail as to scrutinise the matter at hand to its depths. Another problem that is seen within the role of PCA is also due to the lack of power to award remedy. However, the fact that the PCA operates informally and privately has been thought to enhance his powers of persuasion. ...read more.

The Department of Trade and Industry (responsible for licensing such investment companies) was found to be involved in maladministration, including errors, lack of information, etc. all of which resulted in injustice. It should be remembered that in some respects, certain Ombudsmen might be more effective than others in comparison with other available remedies. It should also be noted that the public has direct access to Health Service Commissioners, the Local Commissioners (since 1978), and the European Community Ombudsman. Although, as a system, the Ombudsman suffers from a number of drawbacks- no direct access (with the exceptions); the concept of maladministration being relatively narrow and being linked to injustice suffered as a result of a decision; a significant number of matters fall outside his jurisdiction- a survey by the Select Committee shows that the advantages of retaining the filter system outweigh the disadvantages. It may, therefore, be concluded that Ombudsman makes a significant contribution to the task of ensuring that government decision-making is conducted in defensible ways and produces defensible results. ...read more.