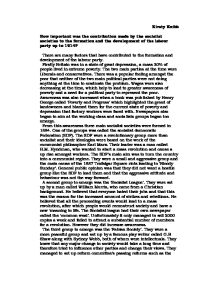 Kirsty Knibb How important was the contribution made by the socialist societies to the formation and the development of the labour party up to 1914? There are many factors that have contributed to the formation and development of the labour party. Firstly Britain was in a state of great depression, a mass 30% of people lived in extreme poverty. The two main parties at the time were Liberals and conservatives. There was a popular feeling amongst the poor that neither of the two main political parties were not doing anything at the time to eradicate the problem. Wages were also decreasing at the time, which help to lead to greater awareness of poverty and a need for a political party to represent the poor. Awareness was also increased when a book was published by Henry George called 'Poverty and Progress' which highlighted the greed of landowners and blamed them for the current state of poverty and depression that factory workers were faced with. Newspapers also began to aim at the working class and socialists groups began too emerge. From this awareness three main socialist societies were formed in 1884. ...read more.

This meant more working class had the vote and therefore There was a need for a political party to give them what they wanted. At present they were voting Liberal as no one else could give them what they wanted. However there are other factors to consider that helped contribute to the development of the Labour party. Many 'Labour clubs' were set up in Yorkshire. They consisted of members who were proud of their working class traditions. In the early 1880's there had been an increase in strikes, which unfortunately had been lost. However this did not discourage them it simply motivated them to call a conference in Bradford, were both workers and Trade unionists met with Kier Hardie. He was the main speaker at the conference, and it was at the conference where it was decided to start an Independent Labour Party. The group consisted of many non- conformists such as Phillip Snowden. Despite being promising the ILP had its limitations it wasn't a national organisation and was merely confined to Yorkshire. The ILP also faced opposition from model unions who claimed it was too socialist and when the ILP did not support the Boer War in 1899 they were tagged as an unpatriotic party making them more unpopular. ...read more.