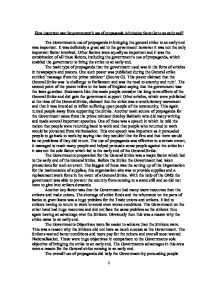 How important was the government's use of propaganda in bringing the strike to an early end? - source related study of the General Strike.

This one speech was important as it persuaded people to go back to work by saying that they wouldn't be the first and that there would be no problems if they did return. The use of propaganda was effective to a certain extent, it managed to reach many people and helped persuade some people against the strike but it was not the sole factor which led to the early end of the General Strike. The Governments preparation for the General Strike was a major factor which led to the early end of the General Strike. Before the Strike the Government had taken precautions for such an event. The biggest of these was the setting up of the Organisation for the maintenance of supplies; this organisation aim was to provide supplies and a replacement work force in the event of a General Strike. ...read more.