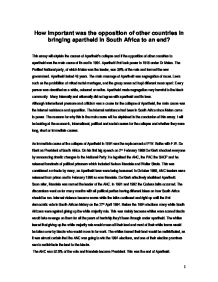 How important was the opposition of other countries in bringing apartheid in South Africa to an end?

How important was the opposition of other countries in bringing apartheid in South Africa to an end? This essay will explain the causes of Apartheid's collapse and if the opposition of other countries to apartheid was the main cause of its end in 1994. Apartheid first took power in 1948 under Dr Malan. The Purified National party, of which Malan was the leader, won 39% of the vote and formed the new government. Apartheid lasted 48 years. The main message of Apartheid was segregation of races. Laws such as the prohibition of mixed racial marriages, and the group areas act kept different races apart. Every person was classified as a white, coloured or native. Apartheid made segregation very harmful to the black community. Many internally and externally did not agree with apartheid and its laws. Although international pressure and criticism was a cause for the collapse of Apartheid, the main cause was the internal resistance and opposition. The internal resistance had been in South Africa since Malan came to power. The reasons for why this is the main cause will be explained in the conclusion of this essay. ...read more.

This drove a further wedge between South Africa and the rest of the World. Another long term for the collapse of Apartheid was the loss of the friendly buffer states. Despite there being worldwide condemnation of South Africa's apartheid laws, surrounding countries supported South Africa. South-West Africa, Rhodesia, Angola and Mozambique were all buffer states. Swaziland, Lesotho, Botswana and Malawi were all economically dependent on South Africa, so they did not condemn them. These states did not support the sanctions and helped goods get through to South Africa. This meant that South Africa did not suffer many economic losses. But in 1974 in Portugal, a revolution led directly to independence for the Portuguese African colonies. Mozambique gained a black government and by 1975 it became independent. In Rhodesia, guerrilla war wore down the white Rhodesians. In 1980, the ZANU Party came to power, led by Robert Mugabe. This effectively meant the end of the white government. In Angola, there was a civil war. There were three Black Nationalist movements called UNITA, MPLA and FNLA. South Africa supported UNITA, who remained in the south while is the north, the MPLA defeated the FNLA. ...read more.

As previously discussed, the Soweto riots, Sharpeville and the ANC were important. Other black resistance groups that were against Apartheid were the MK, Black Consciousness (AZAPO), Inkatha and Buthelezi. They all had violent protests which the government were unable to control as there were so many all over South Africa. In July 1985 the government declared a partial state of emergency which was extended in June 1986 so that the country was under martial law. This showed the government were getting weaker as they could not keep violence under control. Although international opposition to apartheid was very important to its collapse, the internal resistance and opposition were the most important. There had always been opposition within South Africa but it gradually became stronger over the years. The government found it hard to suppress opposition despite bans. Although all the causes analysed in this essay were important in the collapse of Apartheid, the internal resistance to Apartheid was too strong for the government to keep running the country the way they were. South Africa was very close to a civil war in the early 1990s. The opposition of other countries was certainly one of the more important reasons for the collapse, but it was not affecting South Africa as badly as internal opposition. 1 ...read more.