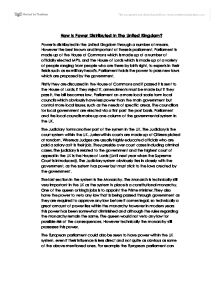 How Is Power Distributed In The United Kingdom?

How Is Power Distributed In The United Kingdom? Power is distributed in the United Kingdom through a number of means. However the best known and important of these is parliament. Parliament is made up of the House of Commons which is made up of a number of officially elected MP's, and the House of Lords which is made up of a variety of people ranging from people who are there by birth right, to experts in their fields such as ex military head's. Parliament holds the power to pass new laws which are proposed by the government. Firstly they are discussed in the House of Commons and if passed it is sent to the House of Lords, if they reject it, amendments must be made but if they pass it, the bill becomes law. ...read more.

They preside over court cases including criminal cases. The judiciary is related to the government and the highest court of appeal in the UK is the House of Lords (Until next year when the Supreme Court is introduced). The Judiciary system obviously ties in closely with the government, as the system has power but must stick to the laws created by the government. The last section in the system is the Monarchy. The Monarch is technically still very important in the UK as the system in place is a constitutional monarchy. One of the queen or king's jobs is to appoint the Prime minister. They also have the power to veto any law that is being passed through government as they are required to approve any law before it comes legal, ...read more.

Overall I can conclude that power in the UK comes from a number of sources. From all the above mentioned sections/columns, a number of them are interlinking and can influence each other and most of the power comes from the Prime minister and government and technically the monarch. However as the UK is a democracy the power really lies with the electorate as they cast the votes which overall distribute power to the government and although each individual only holds a small amount of power, the entire electorate's voting gives the power the government have legitimacy which is vital to the entire UK system. So power can be seen to have been distributed widely in the United Kingdom, despite the fact that on the face of it, it may seem that the power belongs to only a few people. ...read more.