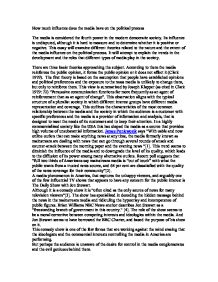 How much influence does the media have on the political process

How much influence does the media have on the political process The media is considered the fourth power in the modern democratic society. Its influence is undisputed, although it is hard to measure and to determine whether it is positive or negative. This essay will examine different theories related to the nature and the extent of the media influence on the political process. It will attempt to explain the trends in the development and the roles that different types of media play in the society. There are three basic theories approaching the subject. According to them the media reinforces the public opinion, it forms the public opinion or it does not affect it (Clark 1979). The first theory is based on the assumption that people have established opinions and political preferences and the exposure to the mass media is unlikely to change them, but only to reinforce them. This view is summarized by Joseph Klapper (as cited in Clark 1979: 72) "Persuasive communication functions far more frequently as an agent of reinforcement than as an agent of change". This observation aligns with the typical structure of a pluralist society in which different interest groups have different media representation and coverage. This outlines the characteristics of the most common relationship between the media and the society in which the audience is a customer with specific preferences and the media is a provider of information and analysis, that is designed to meet the needs of its customers and to keep their attention. ...read more.

News Corporation sued the author for "trademark infringement" over the using of Fox News slogan "fair and balanced" on the cover of the book. The judge ruled in favor of the author saying "Of course, it is ironic that a media company that should be fighting for the First Amendment is trying to undermine it."[8] These examples paint a dark picture of the media influence and the rationale that drives the minds of media personalities and moguls. It shows how the media is a tool for certain people for imposing their views and manipulating the public opinion. The predatory practices of Rupert Murdoch described in The Mass Media Power in modern Britain (Eldridge 1996) indicate that this person sees himself as a power superior than any government in the world and he is not hiding his intentions to use his power to affect national and foreign policy of many countries for personal gains and satisfaction, while crushing the competition. Murdoch openly argued for the war in Iraq and it appears that all of his 175 newspapers across the world have supported it too [9]. The article by Roy Greenslade suggests that "the leader-writers are attempting to break down stubborn public opinion". This shows that in this case and perhaps many others one person orchestrates the agenda setting of 175 newspapers with 40 million copies weekly, and through his media empire he makes the case for a war, that is widely opposed by the public opinion [9]. ...read more.

Second it is not in its agenda to increase its influence, because that would contradict its main purposes outlined in the Charter. And third if the government decides to remove the license fees and turn over the BBC to private hands it would be seen by the public as a sign of fear from scrutiny by journalists whose job is to work for the public interest. Or worse, the government that dares to abolish the license fee will remain in history as the government that gave up to the pressure from commercial interests and destroyed the most precious British institution. The above examples suggest that the media is a very powerful tool and left in the hands of people with no moral principles and positive ideas it could be destructive. The influence of the media is so great that media moguls enjoy power greater than the power of presidents and leaders of international institutions. They use this power to manipulate public opinion, to create chaos, to turn social groups into rivals, to provoke conflicts and they do that for the money and for fun. The hope is in institutions like the BBC that exist to serve the public interest and educate people that whenever someone is fighting, someone else is watching and making money. [1] http://www.time.com/time/magazine/article/0,9171,1855330-1,00.html [2] http://technology.timesonline.co.uk/tol/news/tech_and_web/article3497869.ece [3] Http://www.time.com/time/specials/2007/time100walkup/article/0,28804,1611030_1610841_1609910,00.html [4] http://www.time.com/time/magazine/article/0,9171,1555114,00.html [5] http://query.nytimes.com/gst/fullpage.html?res=9C0DE7D61530F933A15752C0A9659C8B63&scp=14&sq=liberal%20media%20ideologies%20competing&st=cse [6] http://www.telegraph.co.uk/news/worldnews/1581320/Republican-votes-skew-Democrat-primaries.html [7] http://www.guardian.co.uk/comment/story/0,3604,1044416,00.html [8] http://www.nytimes.com/2003/08/23/nyregion/23FRAN.html?ex=1228712400 &en=fd1b2e748a874370&ei=5070 [9] http://www.guardian.co.uk/media/2003/feb/17/mondaymediasection.iraq ...read more.