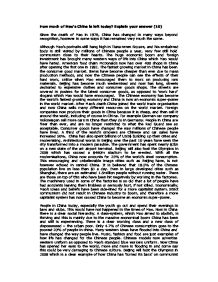 How Much of Maos China is Left today?

How much of Mao's China is left today? Explain your answer (10) Since the death of Mao in 1976, China has changed in many ways beyond recognition, however in some ways it has remained very much the same. Although Mao's portraits still hang high in Tiananmen Square, and his embalmed body is still visited by millions of Chinese people a year, very few still hold communism close to their hearts. The huge economic boom and foreign investment has brought many western ways of life into China which Mao would have hated. American food chain McDonalds now has over 400 shops in China after opening the first one in 1992. The fastest growing market in China has been the consumer good market. Items have become cheaper than ever due to mass production methods, and now the Chinese people can see the effects of their hard work, unlike when Mao encouraged them to work on producing raw materials. Beijing has become much westernised and now has long, streets dedicated to expensive clothes and consumer goods shops. The streets are covered in posters for the latest consumer goods, as opposed to 'work hard' slogans which Mao would have encouraged. ...read more.

Economically, Mao's ideas and beliefs have been side-lined for a more capitalist system. Strict communism did not result in Chinese industry to boom, and therefore a more capitalist system has now caused China to become an economic super-power. People in China today, especially the youth go out and spend their evenings in bars and clubs. This would have not happened in the times of Mao. Now in China there is a clear social hierarchy. A class-system, which Mao aimed to abolish, is thriving and this is mainly due to the massive economical boom China has been and still is experiencing. There is a clear working class and a new class of dispossessed - the urban poor. Only 4.7% of Chinese consumption goes to the poorest 20% of people in china. Many western ideas have flooded into China and have changed the way people live. Music, fashion and food are just examples of how life has changed for the Chinese people. Chinese models now advertise western uniform as opposed to Mao's standard blue workers uniform. Now China has opened her eyes to the world, more and more is flooding in and some say this could be very damaging to Chinese culture. ...read more.

The Chinese people have no real freedom of speech, and when they say the wrong things, they are imprisoned and sometimes killed. The government and policing system in China have an awful human rights record, people are arrested a locked up for a long time. The Tiananmen Square massacre sits as proof how horrific the government can be in dealing with those who oppose them, and that was only 15 years ago. Politically, there has not been a lot of change since the times of Mao. China is still a one party communist state, and the people have very little say. Although the Red Guard are no longer arresting people who dress in western clothes, the government still tries it's best to isolate the public from democratic ideas with massive censorship. Mao's political ideas are still around in China today. In conclusion, there is little left of Mao's China, apart from the obvious communist government. The aim is still for China to push forward to become a great super-power, but western ideas have been brought in with this industrial revolution. Socially and economically, China is a new country, however politically; there is still a lot of Mao's China left. ...read more.