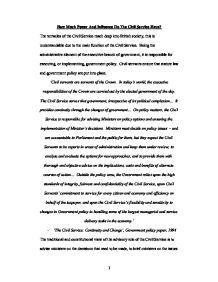 How much power and influence does the civil service have?

How Much Power And Influence Do The Civil Service Have? The tentacles of the Civil Service reach deep into British society, this is understandable due to the main function of the Civil Service. Being the administrative element of the executive branch of government, it is responsible for executing, or implementing, government policy. Civil servants ensure that statute law and government policy are put into place. 'Civil servants are servants of the Crown. In today's world, the executive responsibilities of the Crown are carried out by the elected government of the day. The Civil Service serves that government, irrespective of its political complexion... It provides continuity through the changes of government... On policy matters, the Civil Service is responsible for advising Ministers on policy options and ensuring the implementation of Minister's decisions. Ministers must decide on policy issues - and are accountable to Parliament and the public for them, but they expect the Civil Servants to be experts in areas of administration and keep them under review; to analyse and evaluate the options for new approaches; and to provide them with thorough and objective advice on the implications, costs and benefits of alternate courses of action... Outside the policy area, the Government relies upon the high standards of integrity, fairness and confidentiality of the Civil Service, upon Civil Servants' commitment ...read more.

There are a variety of ways in which Civil Service influence over policy could manifest itself. Among them are: * Imposing on new ministers established policies and practices within the department. * Resistance to any radical policies. Civil Servants are not permitted to defy stated government policy and there is little evidence to suggest they do. Nevertheless, by stressing the negative aspects of new policies and constantly advocating a more cautious line, there is a possibility that ministers may well be forced to 'water down' proposals. * Manipulation of information may occur. Ministers rely on officials to supply them with background facts upon which to base decisions. Skilful officials may be able to present statistics and research findings in a way as to influence final conclusions. * The BBC TV series 'Yes Minister', often showed Civil Servants hatching conspiracies with colleagues in other departments in order to get their own way. Though clearly over exaggerated for the dramatic and comedic effect, many ministers, including Margaret Thatcher, privately admitted that the show carried some truth. The following summarises the advantages that Civil Servants have over their ministers: ADVANTAGES OF CIVIL SERVANTS Advantages enjoyed by Civil Servants * Permanence * Professionalism * Access To Information * More Time Available * Less Political Constraints Disadvantages suffered by ministers * Temporary Appointment * Often No Specialised Knowledge * Rely On Officials For Information * Heavy Workload * Constrained By Colleagues, etc. ...read more.

An example of this, in 1999, when Chancellor Gordon Brown was resisting calls for extensive increases in spending on health and education, some critics suggested he had 'gone native', suggesting that Brown had been influenced by the Civil Servants, adopting their norm of behaviour and so losing his enthusiasm for spending. Politicisation - This sees the Civil Service as overtly political in its motivations. This is not to say that it's either left or right wing, the Civil Service is seen as open to undue influence by ministers, that it tends to lose its traditional neutrality and, like a chameleon, adopts too readily to the political environment and becomes the willing instrument of party rule. The reason why it might do this is to increase its influence by throwing its lot in with powerful politicians of the day. All the above information concludes to show that the Civil Service has influence and power of some sort, how much power depends on each individual Civil Servant and the minister. As was stated above we know that Civil Servants give advice and in this sense they are bound to have some influence over decisions, it just depends how far the Civil Servant is willing to interfere with the political matters to get their point across to the minister, whilst making it look like it was the ministers decision, not theirs. ...read more.