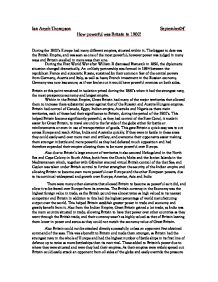 Ian Aryeh-Thompson September04' How powerful was Britain in 1900? During the 1900's Europe had many different empires, situated within it. The biggest to date was the British Empire, and was seen as one of the most powerful; however power was judged in many ways and Britain excelled in more ways than one. During the First World War after William II dismissed Bismarck in 1890, the diplomatic situation changed dramatically. An unlikely partnership was formed in 1894 between the republican France and autocratic Russia, sustained by their common fear of the central powers from Germany, Austria and Italy; as well as heavy French investment in the Russian economy. Germany was now less secure, as if war broke out it would have powerful enemies on both sides. Britain at this point remained in isolation prized during the 1880's when it had the strongest navy, the most prosperous economy and largest empire. Within in the British Empire, Great Britain had many of the major territories that allowed them to increase there substantial power against that of the Russian and Austria-Hungary empires. Britain had control of Canada, Egypt, Indian empire, Australia and Nigeria as there main territories, each of these had their significance to Britain, during the period of the 1900's. ...read more.

Leaving more able Battle ships and allowing them to easily overtake opponents and making them more powerful over Europe, as no-single empire had any chance of winning against Britain as they were very intelligent political and tactical and had a large amount of firearms to use when in battle. Great Britain also at this time in relation to the other main powers was always positioned at the top. During production of Coal, Steel and Pig-Iron Britain was the largest production developer over these powers. As these three materials were widely and continually used, this helped Britain control the trading market to a greater expense, as they produced such a large amount of these materials and could therefore receive more income from trade with these materials. Also due to the fact the British Empire was one of the biggest, these materials would have been smartly used in all countries that Britain owned, significantly enforcing the artillery and technology over these countries. This helped keep Britain ahead and more powerful as they were always a step ahead. Through Britain's amount of these materials there technology was often ahead, allowing them to hold greater value and effect over the rest of Europe, also with the alliance with Japan in the late 1890's. ...read more.

In voting terms England now had a three way party system which, without proportional representation, led to the gradual elimination of the weakest party, the liberals. This new party system was firmer and more successful in making Britain as powerful as it did during the 1900's due, to its foreign policies, and foreign secretaries and balance of intellect and influence over Europe through its politics. Conclusion: Britain during the 1900's was respectfully immensely powerful; from 1890 onwards Britain's power had increased greatly, due to its large empire, which helped it with wars and communication over countries. To the military and navy as Great Britain had the biggest navy around and with its triple Entente, its forces were greater and stronger. However Britain was powerful to a certain degree, as Britain itself was a lonely island and if over-throne was would become ineffective and crumble, as it nearly did. Due to its intelligence and economy as well as it's widespread in many areas. Britain became placed in a successful position that allowed it great importance over the other European powers and was significant powerful dues to many factors that Britain had excelled. ...read more.