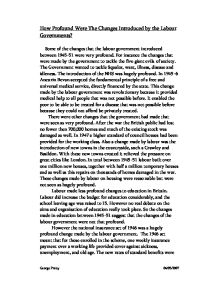 How Profound Were The Changes Introduced by the Labour Governments?

How Profound Were The Changes Introduced by the Labour Governments? Some of the changes that the labour government introduced between 1945-51 were very profound. For instance the changes that were made by the government to tackle the five giant evils of society. The Government wanted to tackle Squalor, want, illness, disease and idleness. The introduction of the NHS was hugely profound. In 1945-6 Aneurin Bevan accepted the fundamental principle of a free and universal medical service, directly financed by the state. This change made by the labour government was revolutionary because it provided medical help to all people that was not possible before. It enabled the poor to be able to be treated for a disease that was not possible before because they could not afford be privately treated. There were other changes that the government had made that were seen as very profound. After the war the British public had lost no fewer then 700,000 homes and much of the existing stock was damaged as well. ...read more.

However the national insurance act of 1946 was a hugely profound change made by the labour government. The 1946 act meant that for those enrolled in the scheme, one weekly insurance payment over a working life provided cover against sickness, unemployment, and old age. The new rates of standard benefits were �1.60 for a single person and �2.40 for a married couple, the act limited unemployment benefits to thirty weeks. The act also immediately paid the old age pensioners the new rates, this was a profound change made by labour because this was more than double what the current pension was. Two further acts followed in 1948 by labour. Firstly the national assistance act provided a safety net for those who were not covered by the existing legislation, or whose benefits were inadequate. Secondly the industrial injuries act now made the state responsible for providing benefits arising from industrial injuries. ...read more.

However the nationalisation of other industries such as coal was a positive change made by labour. This was because the takeover of coal meant that the employees would receive more money from the government then they would do with it being private with the employer being able to decide how much it pays them. In conclusion I believe that the changes made by the labour government where very profound. The introduction of the NHS was such a profound change because it tackled the problem of disease well because enabled all classes to receive medical treatment. However I feel that the changes the labour governments made towards education were not profound in anyway. This is because the only real significant change made by labour was the age of leaving school was raised to 15. Although the introduction of national insurance was a huge change made by labour because it provided a safety net for the working class. It's the work done by labour on Health and National insurance that shows that the changes they made were profound and benefited the British people. George Pretty 04/05/2007 ...read more.