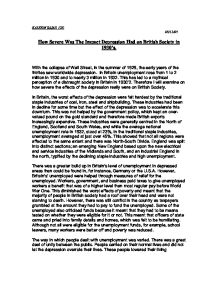 How Severe Was The Impact Depression Had on British Society in 1930's.

KALEEM SAJAD 12D 03/11/03 How Severe Was The Impact Depression Had on British Society in 1930's. With the collapse of Wall Street, in the summer of 1929, the early years of the thirties saw worldwide depression. In Britain unemployment rose from 1 to 2 million in 1930 and to nearly 3 million in 1932. This has led to a mythical perception of a distraught society in Britain in 1930'2. Therefore I will examine on how severe the effects of the depression really were on British Society. In Britain, the worst effects of the depression were felt hardest by the traditional staple industries of coal, iron, steel and shipbuilding. These industries had been in decline for some time but the effect of the depression was to accelerate this downturn. This was not helped by the government policy, which kept an over-valued pound on the gold standard and therefore made British exports increasingly expensive. These industries were generally centred in the North of England, Scotland and South Wales, and while the average national unemployment rate in 1932, stood at 23%, in the traditional staple industries, unemployment averaged at just over 45%. ...read more.

This meant that officers of state came and pried into family details and homes, which was felt to be humiliating. Although not all were eligible for the unemployment funds, for example, school leavers, many workers were better off and poverty was reduced. The way in which people dealt with unemployment was varied. There was a great deal of unity between the public. People carried on their normal lives and did not let the depression overrule their lives. These people lowered their living standards in order to live a hassle free life. Indeed, there was action taken, most notably the Jarrow to London march, as well as increased industrial action in 1931 and 1932. As well as this there was a small increase in the membership of the British Communist Party and short-lived support for "Moseley's" Fascist Party, particularly in the East End of London. But on the whole, these actions were only gestures, and never really involved the majority of the British public. The working class did not respond to long-term unemployment with fatalism. With lack of help from the government parties, working class communities sustained themselves through the depression by creating a new culture. ...read more.

The severity of the impact the depression had on British Society in 1930's is variable. We must understand that the majority of the working class in the 1930's did see some improvements in their living conditions. The "slump" had more than one face. In fact, while poverty and hardship did remain, particularly in the old England of the Industrial Revolution and the traditional staple industries, the great majority of the population saw a significant improvement in living standards by the end of the 1930's. This was due to the emergence of a new, modern England that boomed producing motorcars, new houses and new service industries. Most displaced workers managed to sustain themselves by working in the "black market", reading books and papers from local libraries, going to the cinema and continuing habits and aspects of working class life. The government's interference in to the unemployed peoples lives, such as the means test where they invaded their privacy, was loathed and led to a growing mistrust of the government. In conclusion, the working class despite their position remained proud, and with their neighbours and colleagues also on the dole, the pain of unemployment was in eased by the knowledge that they were not alone. ...read more.