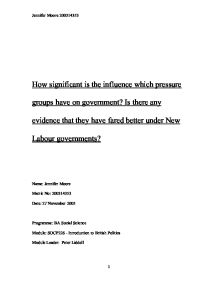 How significant is the influence which pressure groups have on government? Is there any evidence that they have fared better under New Labour governments?

How significant is the influence which pressure groups have on government? Is there any evidence that they have fared better under New Labour governments? Name: Jennifer Moore Matric No: 200314353 Date: 27 November 2005 Programme: BA Social Science Module: SOCP226 - Introduction to British Politics Module Leader: Peter Liddell This essay will outline the significance to which pressure groups have an influence on government and explain how they have fared under New Labour governments. Whilst the term 'pressure groups' may be relatively new, the concept itself dates back as far as 1787. The Society for Effecting the Abolition of the Slave Trade was led by William Wilberforce and Thomas Clarkson and successfully campaigned for the abolition of the slave trade. (Jones, 2004, p233) Pressure groups are formed by a group of people who share a common interest or goal. The intention of the group is to raise the profile or the cause and/or advance it. Unlike political parties, they rarely have a manifesto on a range of policies. Instead they campaign only on specific policies in order to influence public policy formulated by the likes of central or local government. (Grant, 1995, p3) There are generally two types of group: sectional and cause groups. ...read more.

The institutional links a group may have to a particular party i.e in the 1970s, the trade unions caused serious disruption in the UK. (Heywood, 2002, p280) The methods used by groups to exert influence can be said to run on a continuum from low cost, low level, non-violent activities through to high cost, high level, violent activities. (Jones, 2004, p240) Smaller, less well-financed groups may begin with activities such as petitioning which are then submitted to a local or central government. For example, if a local authority wanted to close a school, the parents may get together to produce a petition that would be presented to the local education authority. At the opposite end of the spectrum lie more extreme versions of direct action. For example, in recent years pro-life and animal rights campaigners have targeted high profile figures from that area for assassination or to inflict serious injury upon them. Some groups will use a combination of tactics to optimise their impact. (Smith, 1995, p17) Mid-way on the scale is the lobbying and involves contacting MPs with a view to getting a particular item on the agenda or publicising a particular point of view. Nowadays, whilst hanging around the House is seen less, groups do still lobby MPs in order to try to advance their cause or group. ...read more.

This occurred around the time of the G8 summit at Gleneagles, which attracted large numbers of people fighting under the anti-Capitalism banner. The existence and increased support of these movements is a symptom of the highly influential political culture that exists in Britain, and globally, today. In the last two decades of the 20th century, the influence of the traditional pressure groups, including trade unions has decreased. It could be argued that this decrease has been accelerated during the period of government under New Labour since 1997. However, this acceleration period appears to now be being challenged by an increasingly politically aware electorate. Whilst they may be more likely not to turn out and cast their vote in an organised election, they are much more willing to belong to social movements to ensure their voice is heard. Failure to listen to this voice will have serious ramifications for New Labour. BIBLIOGRPAHY Books Grant, W (1995) Pressure Groups, Politics and Democracy in Britain, Harvester Wheatsheaf Heywood (2002) Politics, Second Edition, Palgrave House of Commons (1985), First Report from the Select Committee on Members' Interests, 1984/85, HMSO Jones et al (2004) Politics UK, Fifth Edition, Pearson Longman Smith, M (1995) Pressure Politics, Baseline Journals Jackson, N (2004) Pressure Group Politics, Politics Review, September Websites http://www.unison.org.uk/about/about.asp, 27 November 2005 http://www.dti.gov.uk/er/emar/tradeunion_membership2004.pdf 27 November 2005 ?? ?? ?? ?? Jennifer Moore 200314353 1 ...read more.