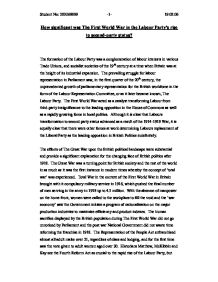 How significant was The First World War in the Labour Party's rise to second-party status?

How significant was The First World War in the Labour Party's rise to second-party status? The formation of the Labour Party was a conglomeration of labour interests in various Trade Unions, and socialist societies of the 19th century at a time when Britain was at the height of its industrial expansion. The prevailing struggle for labour representation in Parliament saw, in the first quarter of the 20th century, the unprecedented growth of parliamentary representation for the British workforce in the form of the Labour Representation Committee, or as it later became known, The Labour Party. The First World War acted as a catalyst transforming Labour from third-party insignificance to the leading opposition in the House of Commons as well as a rapidly growing force in local politics. Although it is clear that Labours transformation to second party status advanced as a result of the 1914-1918 War, it is equally clear that there were other forces at work determining Labours replacement of the Liberal Party as the leading opposition in British Politics indefinitely. The effects of The Great War upon the British political landscape were substantial and provide a significant explanation for the changing face of British politics after 1918. The Great War was a turning point for British society and the rest of the world in as much as it was the first instance in modern times whereby the concept of 'total war' was experienced. Total War in the context of the First World War in Britain brought with it compulsory military service in 1916, which pushed the final number of men serving in the army in 1918 up to 4.5 million. ...read more.

wished such control to continue, and were drawn to the Labour Party as the champion of nationalization."11 Phillips argument is reasonable, however it was the Wartime government, comprised mainly of Conservatives and Liberals, which took control of the five major production industries and this factor could alternatively account for the sweeping majority in favour of the Conservative coalition in 1918 albeit the Conservatives had no desire to continue public ownership after the War. Before 1931 James Ramsey MacDonald demonstrated the importance of personalities in history by contributing to the rise of Labour after 1918 and arguably transforming Labour from a party of protest to into a party of politics before and after the War. The illegitimate son of a female house servant, Macdonald became leader of the Labour Party and later the first Labour Prime Minister in 1923, but after 1931 came to be hated and reviled in the party he allegedly sold out. Regardless of his popularity, Macdonald conducted himself and his party in a moderate manner after the war in a successful attempt to ease concern and dissolve suspicions that the party had radical and revolutionary potential. C.J. Collier discusses how "Macdonald realised that he had to make Labour appear respectable and non-threatening if he was to win over middle as well as working class votes."12 Macdonald needed to dispel Tory Propaganda if Labour were to establish themselves as moderate and although he faced set backs like the Zinoviev letter in 1924, his first office with Labour had demonstrated their competence in handling the day to day responsibilities of governing without pursuing radical policies that some backbench MPs had hope he would. ...read more.

in the Conservative Party may have indirectly helped Labour achieve second party status after 1918, it would be safe to say that even without this element Labour would still have made the gains it did, and Moore admits in his conclusion that "Labour would have advanced in these years whatever the Conservatives decided to do".28 There are many factors involved in accounting for the rise of Labour between 1914 and 1923 but the question of significance still remains unresolved. The rise of Labour was rapid after 1918 and we can safely conclude that it was due to many factors that this occurred. Growing social tensions, unemployment, The Representation of the People Act, Labour ministers war time experience, important personalities in the Labour Party, Trade Union growth, the Liberal split, Clause IV, the list goes on. One important event underlies each of these factors, that being the War. "But for the First World War, [enfranchisement] would have been worth much less to Labour"29 as Michael Hart points out; "The War caused the Liberal Party to break up intellectually"30 state Clarke and Tanner. Without the war Henderson would not have gained experience working in a cabinet, Trade Unions would not have grown on the same scale and state intervention would not have evolved as it did, let alone display its unprecedented success. The First World War produced the perfect conditions for Labour to grow and with good leadership, sound policy and perhaps a bit of good fortune, the Party successfully established itself as one of the premiers of the two-party British electoral system. ...read more.