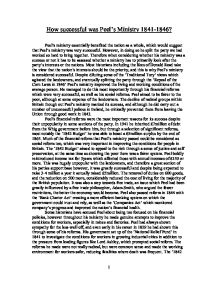 How successful was Peel's Ministry 1841-1846? Peel's ministry essentially benefited the nation as a whole, which would suggest that Peel's ministry was very successful. However, in doing so he split the party we had worked so hard to bring together. Therefore when considering whether his ministry was a success or not it has to be assessed whether a ministry has to primarily look after the party's interests or the nations. Most historians including the likes of Donald Read take the view that the nation's interests should be the priority, and this is why Peel's ministry is considered successful. Despite diluting some of the 'Traditional Tory' views which agitated the landowners, and eventually splitting the party through the 'Repeal of the Corn Laws in 1846' Peel's ministry improved the living and working conditions of the average person. He managed to do this most importantly through his financial reforms which were very successful, as well as his social reforms. Peel aimed to be fairer to the poor, although at some expense of the landowners. The decline of radical groups within Britain though out Peel's ministry marked its success, and although he did carry out a number of unsuccessful polices in Ireland, he critically prevented them from leaving the Union through good work in 1843. ...read more.

The improvement in living conditions for most people, and therefore success of Peel's ministry, was marked by the decline of radical groups such as the chartists. One historian, Donald Read said Peel was: "The hero of equally the newly enfranchised, the middle classes and of the unenfranchised property less masses." Peel's ministry really benefited the poor and the middle class, as it narrowed the gap in some way between them, and the monopolising landowners through the introduction of fairer policies. The popularity of such groups like chartists depended on economic crisis which Peel effectively contained through timely and accommodating reform which kept the majority happy. Peel vitally saw that although it was important to maintain traditional Tory values to retain the support of much of his party, they were holding the party back in many ways, most of them unfairly and unnecessary. He worked around this by successfully diluting traditional policies to appeal to a wider number of people. Peel's political career was closely intertwined with Ireland and O'Connell's career, an Irish political figurehead. Peel's policies towards Ireland were on a whole relatively unsuccessful, and his attempts to win over moderate Catholic opinion while retaining the key features of the established church greatly failed, in some cases actually angering both Protestants and Catholics. ...read more.

He caused such a split in the party that it took around 30years for the conservative party to really find its feet again. Peel's policy to winning over moderate opinion had been hugely successful nationally except it had come at a cost. Peel's ministry from 1841 can be considered a success despite it concluding in the split of the Conservative party in 1846. This is because on a whole, the nation benefited greatly from moderate reform which caused working conditions to improve and the cost of living to be reduced, which improved living conditions. A greater deal of economic stability was reached as well as the national debt being eradicated. The reduction in radical activity emphasised the fact that conditions were improving in Britain at this time. As the average man of Britain benefited from Peel's ministry, it came at a cost to the landowners and Tory Ultras who were a considerable part of the Conservative party's support base. In a sense Peel's ministry was unsuccessful in terms of the negative impact it had on the Conservative party, and the tension that it created which peaked in 1846 as the 'Corn Laws' were repealed and the Conservative party split. However, Peel's ministry was prevailingly successful, in comparison to its party failure, as it greatly benefited the nation as a whole, most importantly though its financial reform, and also reaching its climax in 1846 with the 'Repeal of the Corn Laws.' ?? ?? ?? ?? 1 ...read more.