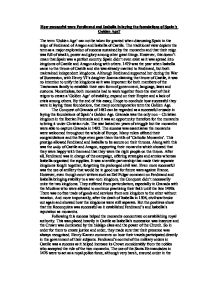 How successful were Ferdinand and Isabella in laying the foundations of Spain's Golden Age?

How successful were Ferdinand and Isabella in laying the foundations of Spain's Golden Age? The term 'Golden Age' can not be taken for granted when discussing Spain in the reign of Ferdinand of Aragon and Isabella of Castile. The traditional view depicts the term as a major exploration of success sustained by the monarchs and that their reign was full of wealth, power and glory among other great things. However, this doesn't mean that Spain was a perfect country. Spain didn't even exist as it was spread into kingdoms of Castile and Aragon along with others. 1479 was the year when Isabella came to the throne of Castile and she was already married to Ferdinand, but both maintained independent kingdoms. Although Ferdinand supported her during the War of Succession, with Henry VI's daughter Joanna claiming the throne of Castile, it was no intention to unify the kingdoms as it was important for both members of the Trastamara family to establish their own form of government, language, laws and customs. Nonetheless, both monarchs had to work together from the start of their reigns to create a 'Golden Age' of stability, expand on their Empire and a lack of crisis among others. By the end of this essay, I hope to conclude how successful they were in laying these foundations, that many contemporaries term the Golden Age. The Conquest of Granada of 1482 can be regarded as a successful crusade in laying the foundations of Spain's Golden Age. ...read more.

They helped with the Reconquista after all, setting their minds away from home and onto war, but even then they still increased their power with more lands and possessions as rewards. On matters of royal finance, Ferdinand and Isabella were heavily reliant on expedients, for example the grants given by the Church and the Pope for the war in Granada. This wasn't setting a good example for their successors who would eventually be faced with long term financial damages. Certainly the monopoly of the silver and gold from the Americas dominated the economy of the two kingdoms and laid down the foundations of the Spanish Empire. But this was not put into good use and the monarchs were too dependent on it and spending it away, regarding it as easy money. Adding to their failures was Castile's production of wool, rather than cloth, which didn't develop any further as the government of the kingdoms weren't paying enough attention to it. As Geoffrey Woodward comments on the 'kingdoms resources being wasted and opportunities for investment were being lost due to muddle-headed thinking by the government'. The mesta, which was a trade union of sheep farmers, was in the control of the nobility. Any attempts to retrieve it would result in a strike back. The only thing keeping their economy from decline were the major trading ports of Valencia and Barcelona. ...read more.

By 1516, Castile was able to lay claims to Hispaniola, Cuba, Jamaica and Puerto Rico, adding more possessions to the Spanish state. But though they managed to gain more control in and out of Spain, the problems began to arise due to the fact that it was hard to govern conquered countries. The ecomienda system that was placed created powerful and wealthy individuals and it would be difficult to fight against them. In the perspective of Ferdinand and Isabella, they were very successful in laying the foundations of Spain's Golden Age. They created royal authority, increased the overseas empire, discovered the New World and conquered Granada. But from a whole perspective with these successes in mind, the build up to the Golden Age can not be regarded the same way. Ferdinand and Isabella didn't create religious unity and as a result many conversos and Jews were mistreated and along with the Muslims they were expelled or forced to convert to the Christian faith. The economic impact was a serious downfall for the monarchs and they took advantage of the Gold and Silver from the New Worlds. The term Golden Age refers to being perfect, but this is an impossible view to take upon as Spain couldn't and would never be a 'perfect' country. As Charles I would soon find out, Ferdinand and Isabella left a lot of damage for their successors to fix. Ferdinand and Isabella were successful in laying their foundations but it can not be termed as a Golden Age and more of nostalgia. WORD COUNT: 1837 ...read more.