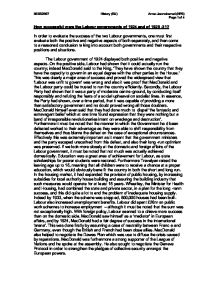 How successful were the Labour governments of 1924 and of 1929-31? In order to evaluate the success of the two Labour governments, one must first evaluate both the positive and negative aspects of both separately, and then come to a reasoned conclusion taking into account both governments and their respective positions and situations. The Labour government of 1924 displayed both positive and negative aspects. On the positive side, Labour had shown that it could actually run the country; indeed MacDonald said to the King, 'They have shown the country that they have the capacity to govern in an equal degree with the other parties in the House.' This was clearly a major area of success and proved the widespread view that 'Labour was unfit to govern' was wrong and also it was proof that MacDonald and the Labour party could be trusted to run the country efficiently. Secondly, the Labour Party had shown that it was a party of moderate centre-ground, by conducting itself responsibly and refuting the fears of a social upheaval on socialist lines. In essence, the Party had shown, over a time period, that it was capable of providing a more than satisfactory government and no doubt proved wrong all those doubters. MacDonald himself even said that they had done much to dispel 'the fantastic and extravagant belief which at one time found expression that they were nothing but a band of irresponsible revolutionaries intent on wreckage and destruction'. ...read more.

In the foreign sphere, the Labour government were relatively successful. However there was the issue of the Soviet Union, which was a negative and it led to the eventual collapse of the Labour government. MacDonald personally did not share the Party enthusiasm for friendship with the Soviet, however he choose to grant diplomatic recognition. However the mistake was to negotiate a commercial treaty with Russia, in which the British would be compensated for assets seized during the Bolshevik revolution and the British would therefore loan �30m to the Soviet. This was a mistake as it was extremely controversial, and immediately it was attacked by the Conservatives, and eventually the Liberals (with the added input of Lloyd George) attacked it thus seemingly leaving the Labour government doomed. The Labour government of 1929 was again a minority government, however it was the biggest single party, but it must then be noted that in the event that the Liberals and Conservatives combined - Labour could be defeated. In general, the domestic situation remained stable and unemployment was still a serious problem. In terms of the positives for the new Labour government; these appeared significantly in foreign affairs. Although MacDonald and the new Foreign Secretary, Henderson, often disagreed, together they accomplished quite a lot. Examples of their achievements include the Young Plan, in which Henderson took the lead in order to reduce international tension. ...read more.

In conclusion, when comparing both governments to each other, the Labour government of 1924 was much more successful than that of 1929. Perhaps this was because the country's expectations of Labour were originally very low, and so by running the country sufficiently (and successfully), the government appeared more successful. The positives from 1924 far outweigh the positives from 1929, as in 1924 - the government proved it could run the country, it stakes it's claim to the moderate centre-ground, it achieved goals in the housing and education markets, and when it actually was defeated - it managed to escape relatively unscathed. In 1929 - there were advantages especially in Foreign Affairs with international conciliation and improved relations, however this did not work with the colonial issues. Furthermore with the stock-market crash of October 1929 - this put Labour into an extremely undesirable position and one in which it failed to deal with even adequately. In 1929 there were the negative of the weakness on policy, especially with unemployment, and this continued with the next government. In terms of individual success, the 1924 government was extremely successful as it proved the majority of people wrong that Labour could run the country. The 1929 government was more successful in foreign policy however it failed to solve the domestic problems and for a government to work properly - the domestic situation must be positive. Therefore the 1929 Labour government was rather unsuccessful as a government. 09/05/2007 History (ISJ) Aman Janmohamed (NPS) Page 1 of 4 ...read more.