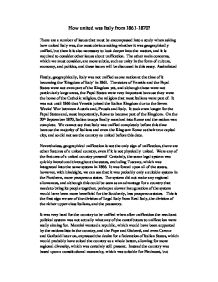 How united was Italy from 1861-1870? There are a number of issues that must be encompassed into a study when asking how united Italy was, the most obvious asking whether it was geographically unified, but then it is also necessary to look deeper into the matter, and it is required to consider other issues about unification. The other main concerns, which we must consider, are more subtle, such as unity in the form of culture, economy, and politics, and these issues will be discussed in this essay. Assimilated Firstly, geographically, Italy was not unified as one nation at the time of it becoming the 'Kingdom of Italy' in 1861. The states of Venetia and the Papal States were not even part of the Kingdom yet, and although these were not ...read more.

Nevertheless, geographical unification is not the only sign of unification, there are other features of a united country, even if it is not physically united. Were any of the features of a united country present? Certainly, the same legal system was quickly introduced throughout the states, excluding Tuscany, which was integrated into the same system in 1866. It was forced upon all of the states, however, with hindsight, we can see that it was probably only a suitable system in the Northern, more prosperous states. The system did not make any regional allowances, and although this could be seen as an advantage for a country that needs to bring its people together, perhaps a slower inauguration of the system would have been more beneficial for the Southerly, less prosperous states. ...read more.

It might be though that because the country had its constitution, still based on Charles Albert's Statuto of 1848, with the sovereign body being the King in Parliament, that Italy was a democratic country. As it turned out, it was not at all. Voting was restricted to males over 25 years of age, and who were literate and tax paying. The voting numbers compared to the total population were of Lilliputian proportions, amounting to 2%, hardly a democracy. Once again, we see the split between Legal Italy, who were the 2% who could vote, and Real Italy, who were the other 98%. So the constitution did not provide particularly good representation for the majority of the country, it was greatly biased towards Piedmontese businessmen and rich families. ...read more.