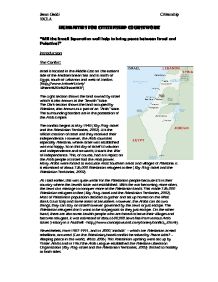 HUMANITIES FOR CITIZENSHIP COURSEWORK "Will the Israeli Separation wall help to bring peace between Israel and Palestine?" Introduction The Conflict Israel is located in the Middle East on the eastern side of the Mediterranean Sea and is north of Egypt, south of Lebanon and west of Jordan. (http://www.answers.com/ Where%20is%20Israel%3F) The Light section shows the land owned by Israel which is also known as the "Jewish" state. The Dark section shows the land occupied by Palestine, also known as a part of an "Arab" state. The surrounding borders are in the possession of the Arab Empire. The conflict begins at May 1948 (Kay Prag- Israel and the Palestinian Territories, 2002). It is the official creation of Israel and they received their Independence. However, the Arab countries especially Palestine, where Israel was established was not happy. So in this day of Israel's Evolution and Independence and onwards, it starts the War of Independence. This, of course, had an impact on the Arab people as Israel had the most power. Many Arabs were forced to evacuate most Southern areas and villages of Palestine. It is estimated of about 726,000 Palestinian refugees to flee (Kay Prag- Israel and the Palestinian Territories, 2002). As I said earlier, this was quite unfair for the Palestinian people because it's in their country where the Jewish state was established. With the war becoming more often, the Jews can manage to conquer more of the Palestinian lands. This made 726,000 Palestinian refugees to flee (Kay Prag- Israel and the Palestinian Territories, 2002). Most of Palestinian population decided to gather and set up homes on the West Bank, Gaza Strip and some areas of Jerusalem. However, the Arabs can do two things; they can stay on Israel however governed by the Jews or just escape. The Palestinian refugees don't want to be scapegoats so they just escape. On the other hand, there are also some Jewish people who are forced to leave their villages and become refugees. ...read more.

(New Perspectives, Israel and the Arab nations in conflict by Nathaniel Harris) Nevertheless, many people disagree and say that Jews was the real refugees. Obviously, we already know in History during the Holocaust in World War Two, where many Jews were forced to become refugees because of prejudice and persecution by the Nazis. By the end of the war many had sympathy for the Jews and it is mainly the reason as to why the idea of Zionism was very popular. Conversely, this conflict not only has effects on both Jewish and Palestinians but also on the rest of Middle East as well. This conflict effect neighbouring countries such as Egypt, Lebanon and Jordan. This conflict portrays Middle East as the source of political and general turmoil throughout the world. Also, the Middle East is considered into being a place of pain, destruction and terror. How have they tried to deal with it? The conflict between the Arabs and the Jews has lasted for long term; there had been many attempts to bring peace. Even though Israel wants to negotiate (which means to attempt to come to an agreement on something through discussion) with Palestine to bring peace, they refused. As a result, this ends up as a war that slaughtered many Arabs. Israel had the most power. "In 1959 Yasser Arafat established the political/military organisation al-Fatah and as a result they established the Palestine Liberation Organisation (PLO)" (Kay Prag- Israel and the Palestinian territories, 2002) The aim of this organisation was to wipe out the Jews so they can regain the land that should be theirs. Arafat declared "jihad" which literally means holy war with the Jews. With the combined forces of the Middle East versus Israel, they all lost the battle three times. Yet Israel seeks peace. "During the Six Day War, June 1967, Israel captured Sinai, the West Bank and part of the Golan Heights" (Kay Prag-Israel and the Palestinian territories, 2002) ...read more.

Its name is derived from the green pencil used to draw the line on the map during the talks (http://en.wikipedia.org/wiki/Green_Line_(Israel)). This will cause annoyance and distress, mostly because it gives the notion that Israel is making all the important decisions. Setting this border means no negotiations will be reached and Israel can close off the border at anytime they want limiting freedom. This wall gives Israel a massive advantage from having a great opportunity of having a safe area but also increased opportunities. There are many things both sides can do to each other to cause more problems. While the wall was there, it's impossible to do so. Restrictions and boundaries are set up for the Palestinians. This especially affects the Palestinian population as much of the farmland and water supplies are now owned and controlled by Israelis. However, arrangements have been made. Israelis now partially allow Palestinian farmers to cross their country however guarded and each farmer's identity should be inspected before they cross. This wall can cause huge problems for workers and the economy. Even though there have been arrangements made for those who need to get between the two areas, the land the wall is built on is where the primary income of a family is located, but if they cannot reach their land, it wouldn't just cause problems in the economy but also their family suffers as well. The wall stands up for itself as a Separation barrier which save lives against terrorism, and it make life better. Normal, innocent people will not have to live in fear. They can finally have the freedom they deserved and start to enjoy life. With the wall still on infrastructure, it is not guaranteed 100 percent that the Jewish population is safe from murder, but having such a wall can be a benefit for the innocent Jews without a doubt. However, this increase hatred and mistrust between both sides. As a result, negotiation would take longer to involve as anger and depression was still on the mind of both sides. ...read more.