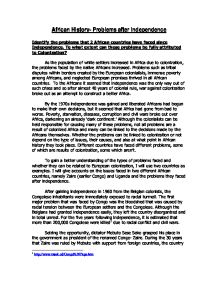 Identify the problems that 2 African countries have faced since Independence. To what extent can these problems be fully attributed to Colonization?

African History- Problems after Independence Identify the problems that 2 African countries have faced since Independence. To what extent can these problems be fully attributed to Colonization? As the population of white settlers increased in Africa due to colonization, the problems faced by the native Africans increased. Problems such as tribal disputes within borders created by the European colonialists, immense poverty among Africans, and neglected European promises thrived in all African countries. To the Africans it seemed that independence was the only way out of such crises and so after almost 40 years of colonial rule, war against colonization broke out as an attempt to construct a better Africa. By the 1970s independence was gained and liberated Africans had begun to make their own decisions, but it seemed that Africa had gone from bad to worse. Poverty, starvation, diseases, corruption and civil wars broke out over Africa, darkening an already 'dark continent.' Although the colonialists can be held responsible for causing many of these problems, not all problems are a result of colonized Africa and many can be linked to the decisions made by the Africans themselves. ...read more.

The division remains till today along with unemployment, poverty, high taxes, starvation, and a country that looks like its routed straight for anarchy. The fact that the Belgian colonists left Zaire without struggle did prove to be a slight advantage to both as neither had to suffer at the time. However the Zairians having had no experience of ruling a country due to the Belgian direct rule policies, thus the country suffered a great deal due to disorganization. The civil wars played a major part in Zaire's struggle as well. These were mainly aroused due to more than 200 different ethnic groups being confined to the European laid borders3. Although Mobuto coming into power can be blamed onto the Zairians themselves, a fundamental part of his victory depended on the support of foreign countries, such as the U.S, Belgium, France and Morocco, all of who provided ample support especially during the Cold War. The support kept the Zairians from overthrowing Mobuto and also kept Mobuto from ceasing the abuse he laid upon the Zairians. Uganda has also faced many problems after independence. After independence in 1962 from the British colonialists, Uganda seemed like it would be one of the more successful independent African countries. ...read more.

It could be debated that most countries in Africa suffered to obtain democratic governments because colonization had caused them to be politically ignorant as well as inexperienced. However Uganda's political instability seems to have been caused because of its incapable leaders. The HIV/AIDS epidemic cannot be classified as a result of colonization because it originated after the country was liberated from its colonialists. Thus concluding that a greater part of Uganda's downfall was due to the country itself rather than its colonized past. In conclusion, although many of the problems that African countries have faced can be related to colonization either fully or partially, many problems have been caused by the decisions made by the Africans and their leaders. One of the problems faced throughout Africa after independence was political instability. The fact that this was an issue in all colonized countries could be an argument against colonialism, however as we saw in Uganda, political problems could also have cropped up due to the leaders themselves. All in all it wouldn't be a fair judgment to hold colonialists responsible for all the problems faced in Africa, as if that were the case, more than a few decades should have been enough to resolve those problems... ...read more.