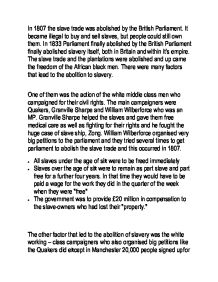 In 1807 the slave trade was abolished by the British Parliament. It became illegal to buy and sell slaves, but people could still own them.

In 1807 the slave trade was abolished by the British Parliament. It became illegal to buy and sell slaves, but people could still own them. In 1833 Parliament finally abolished by the British Parliament finally abolished slavery itself, both in Britain and within it's empire. The slave trade and the plantations were abolished and up came the freedom of the African black men. There were many factors that lead to the abolition to slavery. One of them was the action of the white middle class men who campaigned for their civil rights. The main campaigners were Quakers, Granville Sharpe and William Wilberforce who was an MP. ...read more.

In that time they would have to be paid a wage for the work they did in the quarter of the week when they were "free" * The government was to provide �20 million in compensation to the slave-owners who had lost their "property." The other factor that led to the abolition of slavery was the white working - class campaigners who also organised big petitions like the Quakers did except in Manchester 20,000 people signed up for the petition out of the town's population of 75,000. When the slave trade was illegal the campaigns did not stop and they continued until Slavery itself was illegal. ...read more.

This biography was widly read and turned many people against it. Economics was also a factor and in 1770's the West Indies were becoming less important to Britain because Cuba and Brazil were producing cheaper sugar and because of this many plantations closed down. The demand for slaves fell. I think that slavery was abolished because they were not making any profit now. This is because West Indies where not supplying the British with cheap sugar and this cut the demand down for slaves which then in return just meant they would be losing money because no money would be coming in from the exported sugar and they would have to pay for the slaves well- being and care for he or she and give them food and clothes. Also the invention of machinery probably meant that slaves were not needed ...read more.