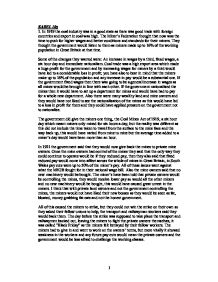 In 1919 the coal industry was in a good state as there was good trade with foreign countries and export in coal was high. The Miner's Federation thought that now was the time to push for higher wages and better conditions and standards for their miners.

KAREL 10s 1. In 1919 the coal industry was in a good state as there was good trade with foreign countries and export in coal was high. The Miner's Federation thought that now was the time to push for higher wages and better conditions and standards for their miners. They thought the government would listen to them as miners made up to 16% of the working population in Great Britain at that time. Some of the changes they wanted were: An increase in wages by a third, fixed wages, a six hour day and immediate nationalism. Coal trade was a high export area which made a huge profit for the government and by increasing wages for miners by a third would have led to a considerable loss in profit; you have also to bear in mind that the miners make up to 16% of the population and any increase in pay would be a substantial one. If the government fixed wages then there was going to be a general increase in wages as all mines would be brought in line with each other. If the government nationalised the mines then it would have to set up a department for mines and would have had to pay for a whole new department. ...read more.

in 1919 miners had been given better working hour conditions and now they were going to be taken away, this would have infuriated the miners. The government said that the mine industry was in a bad way and that sacrifices had to be made to bring the industry back to full strength, the mine union did not believe this and thought that the mine owners could have decreased profits; the TUC was now backing them. Later on that month on Friday 31 July 1925, the government gave the miners a subsidy; they paid the miners for nine months without an increase or decrease in pay. The miner's unions thought they had won and rejoiced. Little did they know that the government had a plan. The government knew they could not win a strike without proper and thought out planning. Their plan was to pay the unions for nine months or until the money ran out, then they would have had set in place proper control of raw materials. Once the money ran out they hoped that the workers would go to work soon as they were not earning any money and were not able to put food on the table for their families, but if they decided to prolong the strike then government would just wait, the government was going to wait for them to eventually give in. ...read more.

radio wanted to publish anything that could put the TUC in a better light then they first had to consult the government, this is another example of the government controlling freedom of speech and changing people's views towards the strike. The miners did not want to cause any harm to England or her people they just wanted fairer conditions and better working practises, but in one of the British Gazette issues it states that the workers tried to starve London and that the special police managed to stop them and that they were baffled by the expertise of the police, whereas we know for a fact that this never happened. The other way the government could get back at the TUC was by making posters which portrayed them in a good light and the TUC as a deceitful and shady character. The government managed to stop printers printing some of the TUC papers and managed to stop any defence they had to the government attacks. The media the general public received was that of the government's not the TUC's and the TUC had very little defenceVolunteers of the OMS were shown as helpful. By winning the support of the public by the use of propaganda and influencing the type of media they received the government managed to get the public to dislike and hate the miner's struggle. I ...read more.