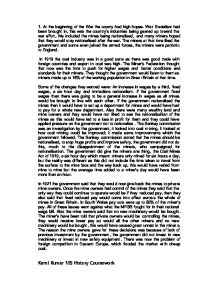 In 1919 the coal industry was in a good state as there was good trade with foreign countries and export in coal was high. The Miner's Federation

1. At the beginning of the War the county had high hopes. War Socialism had been brought in, this was the country's industries being geared up toward the war effort, this included the mines being nationalised, and many miners hoped that they would stay nationalised after the war. The miners at that time liked the government and some even joined the armed forces, the miners were patriotic to England. In 1919 the coal industry was in a good state as there was good trade with foreign countries and export in coal was high. The Miner's Federation thought that now was the time to push for higher wages and better conditions and standards for their miners. They thought the government would listen to them as miners made up to 16% of the working population in Great Britain at that time. Some of the changes they wanted were: An increase in wages by a third, fixed wages, a six hour day and immediate nationalism. If the government fixed wages then there was going to be a general increase in wages as all mines would be brought in line with each other. If the government nationalised the mines then it would have to set up a department for mines and would have had to pay for a whole new department. ...read more.

strength, the mine union did not believe this and thought that the mine owners could have decreased profits; the TUC was now backing them. Later on that month on Friday 31 July 1925, the government gave the miners a subsidy; they paid the miners for nine months without an increase or decrease in pay. The miner's unions thought they had won and rejoiced. The government always had a bad view of unions like the TUC as they as they rightly saw it a contestant to their power Little did they know that the government had a plan. The government knew they could not win a strike without proper and thought out planning. Their plan was to pay the unions for nine months or until the money ran out, then they would have had set in place proper control of raw materials. Once the money ran out they hoped that the workers would go to work soon as they were not earning any money and were not able to put food on the table for their families, but if they decided to prolong the strike then government would just wait, the government was going to wait for them to eventually give in. The government was going to fight a prolonged strike. Once the government was ready they started negotiations then made up a story about a printer not printing a story, and stopped talks. ...read more.