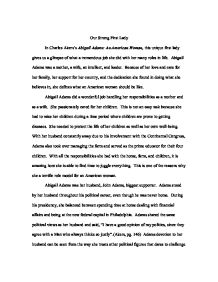 In Charles Akers's Abigail Adams: An American Woman, this unique first lady gives us a glimpse of what a tremendous job she did with her many roles in life. Abigail Adams was a mother, a wife, an intellect, and leader.

Our Strong First Lady In Charles Akers's Abigail Adams: An American Woman, this unique first lady gives us a glimpse of what a tremendous job she did with her many roles in life. Abigail Adams was a mother, a wife, an intellect, and leader. Because of her love and care for her family, her support for her country, and the dedication she found in doing what she believes in, she defines what an American woman should be like. Abigail Adams did a wonderful job handling her responsibilities as a mother and as a wife. She passionately cared for her children. This is not an easy task because she had to raise her children during a time period where children are prone to getting diseases. She needed to protect the life of her children as well as her own well-being. With her husband constantly away due to his involvement with the Continental Congress, Adams also took over managing the farm and served as the prime educator for their four children. ...read more.

Adams sees Franklin as a political threat to her husband and calls him a disgrace to their country. Hancock, viewed by Adams, is a conceited and a 'Golden Calf' (Akers, pg. 81) because he uses his wealth to get his way in politics. The reason why Adams is so harsh towards these great political figures is because she loves her husband so much. Because she is such a large part of her husband's political career, she feels that every success of his was also hers. Her husband goes to Adams for advice and encourage, which is not a common thing for husbands to go to their wives for. She is his greatest friend and "fellow laborer" (Akeres, pg. 164) Adams is a great American woman because of her love, devotion, and support for her husband, even though the toughest times. Abigail Adams voiced her opinions during a time period when women's opinions are not heard. ...read more.

She also did much service to her country and followed her husband when he traveled to England and France. Adams mastered the skill of hospitality perfectly, which included her invigorating conversations which she is known for. Being very outspoken and confident, she always lets people know how she feels about a political topic. Adams is also known as the first women's rights leader. Because she strongly believes in education and women's independency, she was not afraid to voice her views. Her influenced even affected her husband, who listens to her thoughts and views. Her ability to speak freely in a time where women's rights are unheard of makes an American Woman. Abigail Adams is a wonderful role model. She took care of her children and home, constantly supported and stood by her husband, and was not afraid to voice her opinions even when they are frowned upon. Her unique confidence and supportive personality is what makes her stand out among other women during this time period. Abigail Adams is an inspiration to all American women in future generations because of her wonderful job as mother, wife, and political advocate. ...read more.