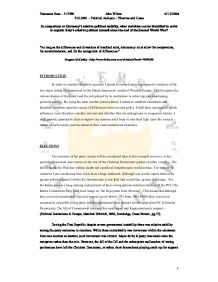 In comparison to Germany's relative political stability, what variables can be identified in order to explain Italy's relative political turmoil since the end of the Second World War? "As long as the differences and diversities of mankind exist, democracy must allow for compromise, for accommodation, and for the recognition of differences." -Eugene McCarthy - http://www.britannica.com/eb/article?tocId=9049640 INTRODUCTION In order to consider the above question I intend to embark upon a comparative analysis of the two states within the framework of the liberal democratic model of Western Europe. I shall explore the various themes of the model and the role played by its institutions in achieving and maintaining political stability. By using the most similar systems theory I intend to establish similarities and therefore comment upon the causes of differences between each polity. I shall then comment on which influences I can therefore consider relevant and whether they are endogenous or exogenous factors. I shall provide quantitative data to support my opinion and I hope to also shed light upon the societal norms of each country and the detail of their state/institutional structures. ELECTIONS The structure of the party system will be considered later in this research however; at this point the discussion must centre on the role of the Christian Democratic parties of either country. The fall of the Berlin Wall has without doubt left a political footprint upon world politics. For both of the countries I am considering here it has been a huge landmark. Although you would expect there to be greater political turmoil within the German state it was Italy that would face greater challenges. For the Italian people a long running undercurrent of their voting patterns had been the fear of the PCI (The Italian Communist Party) and their image as "the bogeyman from Moscow". This meant that although they received considerable electoral support (never below 25% from 1963-1990) they were never accepted as a possible ruling party and this maintained voter turnout for the opposition DC (Christian Democrats). ...read more.

The Council of Ministers (mostly, but not necessarily composed of members of parliament) must retain the confidence of both houses. The Chamber of Deputies has 630 members. In addition to 315 elected members, the Senate includes former presidents and several other persons appointed for life according to special constitutional provisions. Both houses are elected for a maximum of 5 years, but either may be dissolved before the expiration of its normal term. A bill must receive the positive assent of both houses and the Cabinet is equally responsible to both houses, producing a strongly bicameral legislature - (Comparative European Politics, Hans Daalder (1997), Pinter, Wiltshire, pg 33) Germany is a constitutional federal republic, whose political system is laid out in the 1949 'constitution' called Grundgesetz (Fundamental Law). It has a parliamentary system in which the head of government, the Bundeskanzler (Chancellor), is elected by the parliament.The parliament, called Bundestag (Federal Assembly), is elected every four years by popular vote in a complex system combining direct and proportional representation. The 16 Bundesl�nder are represented at the federal level in the Bundesrat (Federal Council), which-depending on the subject matter-may have a say in the legislative procedure. Lately, there has been much concern about the Bundestag and the Bundesrat blocking each other, making effective government very difficult. The function of head of state is performed by the Bundespr�sident (Federal President) in Germany, whose powers are mostly limited to ceremonial and representative duties. - (http://www.bundestag.de/htdocs_e/orga/index.html) ELECTORAL SYSTEM The electoral systems discussed below can be recognised by their use of a two vote system and partial use of a proportional representation. In the elections to the Bundestag, each voter has two votes. The first vote is for candidates in the districts with the candidate receiving the majority vote as the winner. The second votes determine how many representatives will be sent from each party to the Bundestag. The number of representatives for each party is determined according to Hare/Niemeyer formula. ...read more.

Indeed the German "catch-all parties", with less ideological dogma, as described by Kircheimer in 1966 (http://www.janda.org/comparative%20parties/page169.htm) were far more capable of absorbing the political shockwaves. The prevalance of these parties in Germany has created a political population who feel represented and comfortable with their Government. Both countries face challenges from the traditional European cleavages as discussed by Lipset and Rokkan. The urban-rural cleavage has proved an issue, with Italy needing to fund the predominantly agricultural South and Germany the under developed East. The creation and subsequent influence of the Northern League in Italy furthered instability as there appeared a real opportunity for change in regard to political represention The Federal system of Germany has managed these concerns through decentralisation of concerns to a local level, for example tax and the use of manageable electoral districts within a combined electoral system. The German Polity, David Conradt, (2001), Addison Wesley Longman, United States, pg 47) Such an electoral system is now employed in both counties and allows the possibility of strong party grouping within Parliament whilst also reflecting the makeup of society. The system in Italy would always remain volatile as the pure PR system used allowed iodeologically diverse parties to fragment support and make coalitions generally unworkable. Germanys use of the 5% rule in particular, avoided this and created an atmosphere where successful coalition was the norm rather than the aim. Instability arose from the reform to the system as a natural result of this reclassification, but the resulting reduction in parties has supported coalition government. Returning to the point of identification with a political party, the exposure of the corruption inherent in the Italian system left the reputation of the traditional parties and their leaders severely tarnished. Voters were dismayed by the massive aqnd widespread levels of corruption which were obviously so ingrained as to become systemic. I therefore suggest also that the functioning of government within Germany is clearer to the common man and this is an important factor to political stability. ...read more.