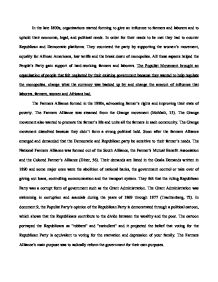 In the late 1800s, organizations started forming to give an influence to farmers and laborers and to uphold their economic, legal, and political needs. In order for their needs to be met they had to counter Republican and Democratic platforms.

In the late 1800s, organizations started forming to give an influence to farmers and laborers and to uphold their economic, legal, and political needs. In order for their needs to be met they had to counter Republican and Democratic platforms. They countered the party by supporting the women's movement, equality for African Americans, low tariffs and the break down of monopolies. All these aspects helped the People's Party gain support of hard-working farmers and laborers. The Populist Movement brought an organization of people that felt neglected by their existing government because they wanted to help regulate the monopolies, change what the currency was backed up by and change the amount of influence that laborers, farmers, women and Africans had. The Farmers Alliance formed in the 1880s, advocating farmer's rights and improving their state of poverty. The Farmers Alliance was steamed from the Grange movement (McMath, 15). The Grange movement also wanted to promote the farmer's life and unite all the farmers in each community. The Grange movement dissolved because they didn't form a strong political hold. Soon after the farmers Alliance emerged and demanded that the Democratic and Republican party be sensitive to their farmer's needs. The National Farmers Alliance was formed out of the South Alliance, the Farmer's Mutual Benefit Association and the Colored Farmer's Alliance (Diner, 56). Their demands are listed in the Ocala Demands written in 1890 and some major ones were the abolition of national banks, the government control or take over of giving out loans, controlling communication and the transport system. ...read more.

The parties were influenced or made up the parties, those who were involved in monopolies and all the corruption associated with that, especially the Republican Party (Diner, 46). Therefore, any attempts by a third party to break such a power would be threatening. At the time, railroad business was a source of wealth for the elite, along with other industries. A party that stood for the bringing down that source of income would alarm a politician or a businessman. The sheer potential size of the People's Party uniting farmers and laborers against the business elite of the country would insure that they are heard by the government. This kind of unity would force the government to comply and therefore the mainstream political parties would be alarmed by these potential changes. The Farmers Alliance also wanted to change the banking system. The Farmers Alliance members were mistreated and overcharged in interest by the banks (McMath, 123). The banks took advantage of desperate people who needed a loan in order to crop for the year. This brought the farmers deeper into debt especially after the Panic of 1873 and all the droughts, blizzards and natural disasters that wore away the amount of crops produced, while the competition from Europe brought down the prices of crops. This prompted the Farmers Alliance to include in their Ocala Demands that the government should be in control of giving out loam and that the national bank, controlled mainly by private banks, should be abolished. ...read more.

Henry Lloyd said, "abandoned by the Republicans and cheated and betrayed by the Democrats", the Populist Party took up the needs of Blacks by acknowledging them as people (Document 6). They let them participate as fellow human beings. The Populist Party wanted to aid the women's cause as well by trying to support them in their quest for suffrage. In document 4, Miss. Reynolds stated that the reason that women had such a good chance in obtaining the right of suffrage in Wyoming was because of the Populist Party support and the Knights of Labor. Republican and Democratic Party would not want women to acquire suffrage because it would give too many rights. They wanted the society to be ruled by white males because they were conservative and had traditional views. The Populist Party was formed in order for the masses to be heard by the government and also to improve their economic circumstances. The main reason that the People's Party was formed was to make the businesses fairer to the consumers by having the prices regulated by the government instead of monopolies. It was important for them to change the backed up currency from gold to gold and silver, so that more money would be circulating around. The People's Party also stood for equal rights for everyone. The mainstream political parties was threatened by the People's Party because they wanted to change the government and society too much by giving the government too much power over the businesses and having the society equal. ...read more.