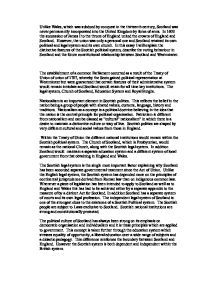 In this essay I will explain the distinctive features of the Scottish political system, describe the voting behaviour in Scotland and the future constitutional relationship between Scotland and Westminster.

Unlike Wales, which was subdued by conquest in the thirteenth century, Scotland was never permanently incorporated into the United Kingdom by force of arms. In 1603 the succession of James I to the throne of England united the crowns of England and Scotland. However, the union was only a personal one and Scotland retained its own political and legal system and its own church. In this essay I will explain the distinctive features of the Scottish political system, describe the voting behaviour in Scotland and the future constitutional relationship between Scotland and Westminster. The establishment of a common Parliament occurred as a result of the Treaty of Union of union of 1707, whereby the Scots gained political representation at Westminster but were guaranteed that certain features of their administrative system would remain inviolate and Scotland would retain for all time key institutions. The legal system, Church of Scotland, Education System and Royal Burghs. Nationalism is an important element in Scottish politics. This reflects the belief in the nation being a group of people with shared values, customs, language, history and traditions. Nationalism as a concept is a political doctrine believing in the idea that the nation is the central principle for political organisation. Patriotism is different from nationalism and can be classed as "cultural" nationalism" in which there is a desire to maintain a distinctive culture or way of live. ...read more.

Their poverty was compounded by the large families which the Church encouraged. Once the Church accepted that the Labour Party was not hostile to religion, the social circumstances of Catholics pushed them overwhelmingly into voting Labour. At the same time their religious ties made them less susceptible either to Conservative appeals to support the (Protestant) British state or to nationalists harking back to the traditions of a largely Presbyterian Scotland. The concentration of Catholics in the West of Scotland makes the habit of Labour voting hard to break and Labour is, as a result, the dominant party in Scotland. Opinion polls indicated that one third of the electorate within Scotland favoured some form of independence and that over 40% wanted a devolved assembly with some taxation and spending power with support for the status quo rarely exceeding 20%. In the run up to the 1992 election opinion polls recorded an increase in constitutional change and one poll in the Scotsman showed that 50% of the population favoured independence. Psychologists estimated that the nationalists might increase their share of seats from 3 to 9 and the Conservatives to drop around 3. The main complaint from Scots was about the nature of policies being decided at Westminster which were being imposed upon them but were in fact not voted for by the Scottish MP's. ...read more.

One Scottish Executive Minister commented: "Westminster has no impact on Scotland; the separation is quite astonishing [it is] much more so than anyone would have realised." It is clear that many councillors still retain significant levels of contact with Westminster MPs. This indicates the continuing importance of UK party political contact within Scottish political networks. Although the Scottish Parliament has many responsibilities the bank of England still decides Scotland's economic fate and the central UK government dictate how key policies should proceed and the UK parliament Prime Minister determines Scotland's future. The Scottish parliament deals with devolved matters and the UK Parliament with reserved matters. The 1707 Act of Union did not create a unitary state as often assumed. The common Parliament was central to the union but its role was limited as much of Scotland's decisions were made through the separate institutions so therefore there were many reasons why Scotland should function as an independent country. Problems still exist however within a back lash from English Citizens claiming that Scottish MP's still vote in Westminster but English MP's have no say in Scottish affairs. While there are tensions in the complex relationship between the tiers of government, the general view is that things have improved for local government since devolution. "Things are better than they were before devolution. They are not as good as they could be but I think that is a development issue; things will improve. ...read more.