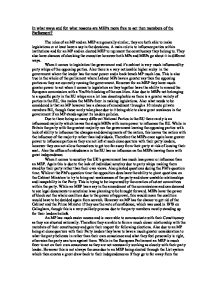 In what ways and for what reasons are MEPs more free to act then members of the Parliament?

In what ways and for what reasons are MEPs more free to act then members of the Parliament? The roles of an MP and an MEP are generally similar, they are both able to make legislations or at least have a say in the decisions. A main role is to influence parties within institutions and for an MP and an elected MEP to represent the constituency they belong to. They also have chances of checking the executive however both MPs and MEPs go about it in different ways. When it comes to legislation the government and it's cabinet is very much influenced by party whips of the opposing parties. Also there is a very noticeable higher archy in the government where the leader has the most power and a back bench MP much less. This is also true in the whole of the parliament where Labour MPs have a greater say then the opposing parties as they are currently running the government. ...read more.

Therefore the MEPs once again have greater power to influence parties as they are not left at such close quarters with their party leaders, however they can not allow themselves to get too far away from their party at risk of loosing their seat.. Also the office of ombudsman in the EU has no influence on the MEPs leaving them with great independence. When it comes to scrutiny the UK's government has much less power or influence than an MEP. Again this is due to the lack of individual scrutiny due to party whips making them stand by their party rather than their own views. Also planted questions during the PM's question time. While at the PM's question time the opposition does have the ability to plant questions on the Cabinet Ministers to try to bring out weaknesses of the party and show unstable relationships and incapability in the Party. This is trying to be improved by the creation of select committees within the party. ...read more.

While in the European Parliament an MEP is much freer to act on their own conscience as they are not necessarily working as closely with their party leader. However this is not always the case due to an MEP being elected through the List system which then creates a great draw back to their independence as if they go to far away from the party's principles and lose connection with their constituency then they can be replaced by someone else who moves to their place in the list system. Therefore MEPs and MPs are both as free each other just in different concepts. The general view after studying the different aspects of a MEP and a MPs job, is that a MEP is more free to act, and has greater independence in the choices that they make in Parliament. The only aspect in which a MP has an equal liberty of freedom would be when it comes to representing their constituency, as they are national rather then international which an MEP would be. It gives the MP more time and space to plan their next step with their constituency, and bring a closer relationship to his or her area. ...read more.