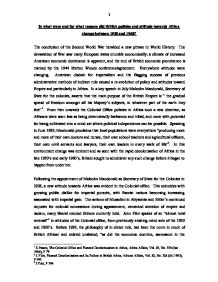 In what ways and for what reasons did British policies and attitude towards Africa change between 1938 and 1948?

In what ways and for what reasons did British policies and attitude towards Africa change between 1938 and 1948? The conclusion of the Second World War heralded a new phrase in World History. The devastation of War saw many European states crumble economically; a climate of increased American economic dominance is apparent, and the end of British economic prominence is marked by the 1944 Bretton Woods conference/agreement. Everywhere attitudes were changing. American disdain for imperialism and the flagging success of previous administrative methods of indirect rule caused a re-evolution of policy and attitudes toward Empire and particularly in Africa. In a key speech in July Malcolm Macdonald, Secretary of State for the colonies, asserts that the main purpose of the British Empire is " the gradual spread of freedom amongst all his Majesty's subjects, in whatever part of the earth they live"1. From then onwards the Colonial Office policies in Africa took a new direction, as Africans were seen less as being determinedly barbarous and tribal, and more with potential for being cultivated into a mind-set where political independence can be possible. Speaking in June 1939, Macdonald proclaims that local populations were everywhere "producing more and more of their own doctors and nurses, their own school teachers and agricultural officers, their own civil servants and lawyers, their own leaders in every walk of life"2. ...read more.

However Robert Pearce argues against placing too great an emphasis on the achievement and significance of Macdonald. For example the inquiry into African land law and policy never materialised, falling casualty to war. Moreover thought he did succeed in appointing several new colonial officials, he was unable to create the new generation of officers he'd previously spoken of, with many traditional officers remaining in Colonial Office positions during and even after his period of leadership. As such many old attitudes still remained in the Colonial Office. Pearce also argues against exaggerating the significance on Macdonald's 1938 address, which seemingly8 sets the concept of African self-government as a Colonial Office agenda. He argues that "Macdonald was not defining colonial policy: his speculations were just that, speculations"9. He goes on to assert that Colonial Office policy isn't truly defined until the late 1940's Macdonald and his ministers were never committed to any drive towards decolonisation; their concerns had in fact been colonial reform, with the mind of conserving British Imperial rule. Following his departure from the Colonial Office, this agenda still remained. Macdonald's successors Moyne and Cranborne in 1942 were very much of the view that self-government was not an option for many parts of British Africa. ...read more.

Coinciding with this was growing national consciences amongst the educated Africans, led by Azikiwe13 in Nigeria and Nkrumah in Ghana. Cohen acknowledged this growing trend and saw Ghana as being the most politically advanced African nation. So in Ghana at least, "Indirect rule was to give way to democratic, or at least 'representative', local government"14. The scope for legislative council was extended in both Nigeria and The Gold Coast, and although more positions were opened to Africans, those appointed were chosen by chiefs and other local authorities and not the locals. Although there seems to be a British commitment to transferring power to the African peoples, Cohen and other Colonial Office members were still without a dead line at this point. Their efforts to change at their own pace proved unsuccessful with the African nationalist, and from the 1948 riots in Accra, Colonial Office attitudes towards African self-government becomes more direct. Triggered by fears of communist insurgence, the colonial office begins to align itself to key African nationalist, and embarks on a program to educate and eventually allow for black-led African self-governance. The Colonial Office envisaged a period of long-lasting nation building, starting from economic and welfare schemes, leading to the 'Africanisation' of administration and eventually constitutional and political change. ...read more.