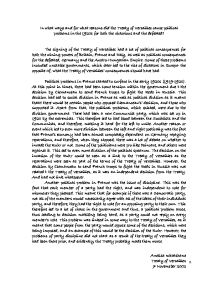 In what ways and for what reasons did the Treaty of Versailles cause political problems in the 1920s for both the victorious and the defeated?

In what ways and for what reasons did the Treaty of Versailles cause political problems in the 1920s for both the victorious and the defeated? The signing of the Treaty of Versailles had a lot of political consequences for both the wining powers of Britain, France and Italy, as well as political consequences for the defeated, Germany and the Austro-Hungarian Empire. Some of these problems included unstable governments, which later led to the rise of dictators in Europe- the opposite 0f, what the Treaty of Versailles' consequences should have had. Political problems in France started to surface in the early 1920s (1919-1920). At this point in times, there had been some tension within the government due t the decision by Clemanceau to send French troops to fight the Reds in Russia. This decision had led to social division in France as well as political division as it meant that5 there would be certain people who opposed Clemanceau's' decision, and those who supported it. Apart from that, the political problems, which existed, were due to the division government. There had been a new Communist party, which was set up in 1920 by the extremists. ...read more.

Italy had been faced with political problems even before the Treaty of Versailles over the war debate, on whether to go to war or not. This had caused a split in the Italian nation, between those who supported it and those who opposed it- the interventionists and those who were for it, the neutralists. One historian even described the situation as a "violent laceration of the political fabric, a bitterness of feeling, more characteristic of a civil war than a national war". One of the biggest political problems in Italy was due to the dismissing of Orlando who had wanted Italy to get the land, which she was promised. He had been seen as a very patriotic and heroic figure in Italy, and his dismissal led to the government being thought as weak and unpatriotic, as the government was seen as eliminating Italy's only hope of getting what she deserved and what she had been promised. This therefore caused the people to oppose the government and to vote against them. This had been a big political problem for the government, as it meant that it did not have the support of their people. ...read more.

Another political problem, which existed in Germany, was the issue of multiplicity. This occurred in Germany in the late 1920s, and many farmers and small businessmen and retailers were in trouble while prices and wages were rising. The effect of this was the fact that there each section of class of the society wanted independent representation in parliament, and thus, the problem which would occur as a result of this would be that the government would be unable to work properly, and efficiently. I don't personally think that this is very much linked with the Treaty of Versailles, but at the same time, the reason which there were such problems with the economy was due to the hyper-inflation which was due to the high reparations price, and also due to the loads which Germany had made for the America. Germany had been enormously socially and politically divided as a consequence of the Treaty of Versailles as it was thought to be unfair, and unjust, and therefore, was repelled by most of the German people. This had been exactly the same situation which took place in Italy, as they and also felt cheated, and thus, socially divided between those who accepted and repelled the Treaty of Versailles. Anelisa mkatshane 1 Treaty of Versailles 7 Novemeber 2002 ...read more.