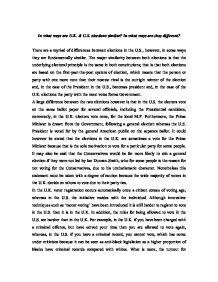 In what ways are U.K. & U.S. elections similar? In what ways are they different? There are a myriad of differences between elections in the U.S., however, in some ways they are fundamentally similar. The major similarity between both elections is that the underlying electoral principle is the same in both constitutions; that is that both elections are based on the first-past-the-post system of election, which means that the person or party with one more vote than their nearest rival is the outright winner of the election and, in the case of the President in the U.S., becomes president and, in the case of the U.K. elections the party with the most votes forms Government. A large difference between the two elections however is that in the U.S. the electors vote on the same ballot paper for several officials, including the Presidential candidate, conversely, in the U.K. electors vote once, for the local M.P. Furthermore, the Prime Minister is drawn from the Government, following a general election whereas the U.S. President is voted for by the general American public on the separate ballot. ...read more.

59% of the population turned out to vote in the 2001 general election. Another difference between the two election systems is the dates at which the elections occur; in the U.K. the dates of the election are flexible and are susceptible to effective use by the Government, on the other hand the U.S. election dates are fixed and so cannot be manipulated in such a way. Linked to the election dates are the durations of the campaigns in both countries. In both countries the campaigns are flexible, but in the U.K. the duration of the campaigns is much shorter than the election campaigns in the U.S. The average campaign in the U.K. last for approximately three weeks, however John Major's campaign in 1997 was nearly six weeks long due to the fact that he thought that he was not very sure that he would be elected. In America, in contrast, the campaigns can be months long. This is partly due to the fact that America is larger and there is a greater population than there is in the U.K. ...read more.

In the U.K. there is more voting choice than in the U.S. The U.S. is conventionally described as a two party system, which is true in the sense that all members of the senate and the House are either Republicans or Democrats, however, often, in the Presidential contest there are three candidates; Republican, Democrat and Independent such as Ross Perot in 1992 and 1996 and Ralph Nader in 2000. In the U.K. on the other hand there is much debate over whether the U.K. is a two party system or a three party system. Traditionally, the U.K. has been a two party system, but with the growing role of the Liberals, popularly seen as the third party in British politics, there are calls that the U.K. is now a three party system, and there are more than two parties in parliament. In conclusion, there are many small differences between the two elections, however, the fact that they are both FPTP systems of election means that the underlying principle behind the elections are both the same. ...read more.